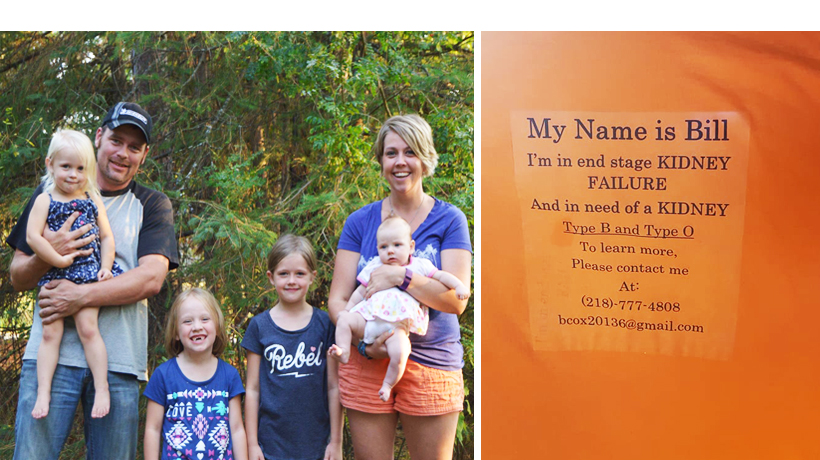 We’ve all said it before, but Becca Bundy of Cook, Minnesota has given the phrase “I owe you,” a whole new meaning. The wife and mother of four experienced the scare of a lifetime several years ago when her then one-year old daughter Hadley suffered a seizure. Panicked, Bundy immediately called 911 and waited for first responders to arrive on the scene.

Volunteer firefighter Bill Cox was the first to show, leaping into action to get the one-year-old stabilized. Bundy remarked Cox’s tenderness with her child and could tell that this wasn’t just another call for him.

After Cox’s life-saving efforts proved successful, the two parted ways, with Bundy feeling forever grateful and touched by the moment. Two years later, their paths would cross again, except this time it was Cox who needed saving. When Bundy stumbled into a local bar, she realized that the bartender behind the counter was none other than Cox, who had been the one to save her daughter’s life. He was sporting a bright orange tee shirt that read, “My name is Bill. I’m in end stage kidney failure and in need of a kidney,” with his blood type and contact information included below.

Immediately struck by the shirt’s message and reminded of the kindness Cox had extended to her years ago, Bundy knew she had to do something. The gears in her mind got to work, and it was then that Bundy decided she had to be the one to donate a kidney to Cox. She went to get tested, and upon finding out they were a match, could barely contain her joy of being able to repay Cox’s life-saving favor.

60-year-old Cox was elated to find out he’d be able to resume his retirement at the log lake house he shared with his wife, Terry, thanks to Bundy’s generous offer. In February, the two checked into the University of Minnesota Medical Center, ready to undergo operations that would replace Cox’s failing kidney with Bundy’s healthy one. The surgery was a success, and Cox is now off of dialysis and feeling better than he has in years. He attributes his second chance at life to Bundy, saying he never would have been able to receive a transplant if it weren’t for her compassion.

Since the operation, the families of the pair have remained close. Bundy’s daughters often draw pictures for Cox to put on his refrigerator and consider him their surrogate grandfather. With no grandchildren of their own, Cox and his wife greatly enjoy the children’s company, and regularly attend the girls’ softball games.

Two people who were once total strangers now share an incredible bond that will last a lifetime, thanks to the generosity and compassion each had for the other. They are proof that life can give us some pretty unexpected twists and turns, and sometimes, a potential tragedy can turn into a miracle.