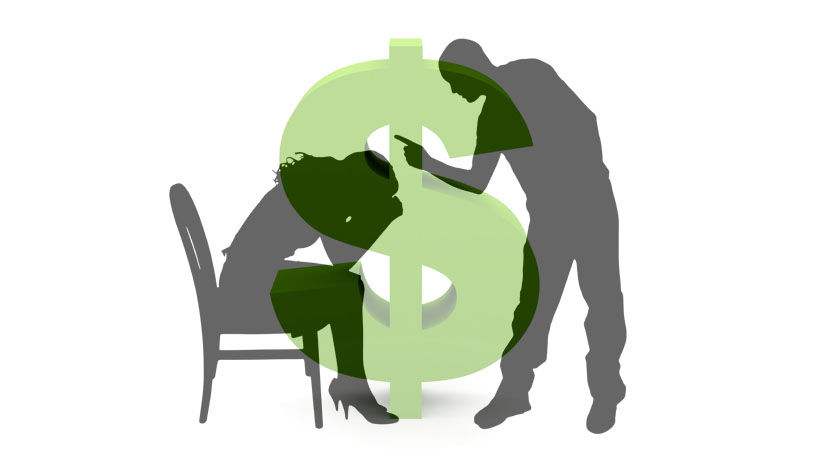 With all the responsibilities that we juggle, hearing someone tell you he’ll cover the bills may sound like a relief. But if an abuser says this, it could be a slippery slope to other malicious behavior. Financial abuse, sometimes called “economic abuse,” is a common tactic used by abusive partners and family members.

While we can’t pinpoint how common financial abuse is, a 2008 study published in the journal Violence Against Women says 99% of domestic violence survivors had also experienced financial abuse. This Michigan State University study, titled “Development of the scale of economic abuse,” found this number based on interviews with 103 survivors.

What is financial abuse?
The National Network to End Domestic Violence (NNEDV), which is a nonprofit organization that advocates for domestic violence awareness, defines financial abuse as a situation where one person uses money to control the victim. When the victim feels financially dependent on the abuser, the victim feels obligated to stay with the abuser or obey his demands.“Financial abuse – along with emotional, physical, and sexual abuse – includes behaviors to intentionally manipulate, intimidate, and threaten the victim in order to entrap that person in the relationship,” says the NNEDV. The organization’s website says financial abuse may subtly progress over time. What could start as “covering the bills” can turn into something more deceptive.

How the abuser traps the victim
The Canadian-based nonprofit Battered Women’s Support Services (BWSS) says financial abusers may use these tactics:

In 2003, the National Research Council gathered a panel that published a report titled “Elder Mistreatment: Abuse, Neglect, and Exploitation in an Aging America” in the National Academies Press. The panel, called the Panel to Review Risk and Prevalence of Elder Abuse and Neglect, highlighted the impact of financial abuse on the elderly.

The panel determined the elderly were especially vulnerable to financial abuse due to more money in their savings accounts, a feeling of entitlement to inheritance from the abusers, and declining cognitive abilities from the elderly.

The perpetrators of elderly financial abuse may persuade the elderly to sign a will, insurance policy, or deed they wouldn’t normally have signed. They may also mishandle the elderly’s assets or promise long-term care in exchange for money and never deliver on the promise.

How to survive financial abuse
Leaving a financially abusive relationship is easier said than done, especially if the victim has children or other people depending on the abuser’s income. However, taking back financial independence is possible. The BWSS suggests taking pictures of legal documents, like a Social Security Number and bank statements, and keeping those away from the abuser. Then, apply for your own credit card and talk to your bank about joint bank accounts so that both people must sign on any transaction.

If you suspect you’re in danger of financial abuse, you can find help at the National Domestic Violence Hotline by dialing 1−800−799−7233 or visiting thehotline.org.