Narcissists Vs. Sociopaths: How to Tell the Difference 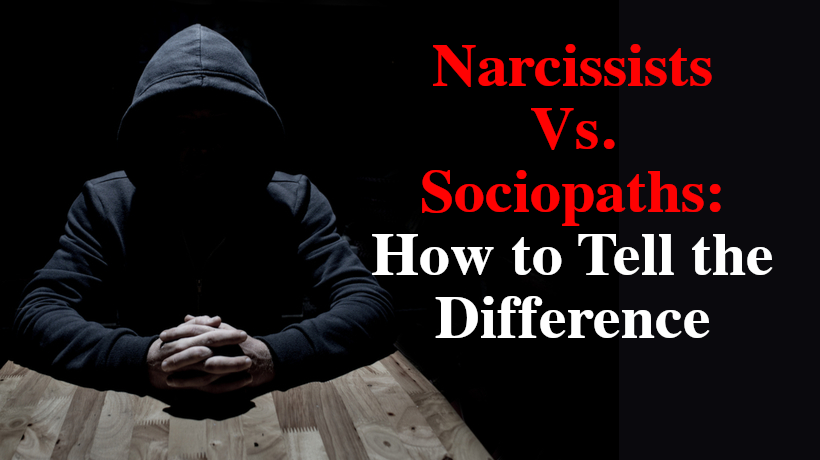 In the current time of information overload, it’s incredibly easy to throw labels like “narcissist” and “sociopath” as if they are interchangeable. While there are some similarities between the two disorders, there are many differences. Think you found a narcissist or a sociopath? Here are the three key differences between the two:

There are many similarities between the two. While sociopaths have narcissistic traits, not all narcissists are sociopaths. According to Darlene Lancer, JD, LMFT of Psychology Today, the main key trait that separates the narcissists from the sociopaths is their drive. “Sociopaths are more cunning and manipulative because their ego isn’t always at stake. In fact, they don’t have any real personality,” Lancer says. She credits them to be con artists who can assume any personality they wish.

Sociopaths don’t care what you think of them.

Sociopaths are willing to do anything to manipulate you into becoming a pawn for their ultimate needs and goals. The thing is, sociopaths, don’t care what you think of them. According to Lancer, “narcissists are more interested in what you think of them. They need others’ admiration.” This means that they are dependent on the admiration for others in order for them to get what they want: success and fame. According to BetterHelp.com, a conversation with a sociopath will “not likely be self-centered,” due to the fact that “To be an effective manipulator, a sociopath must focus on an intended target/victim.”

Narcissists, according to Darrel Turner, Ph.D., a forensic psychologist, essentially [is] somebody who is self-­obsessed to an extreme degree. Reaching the goals of success and fame may be at the top of a narcissist’s agenda. They will often self-prioritize themselves to reach the goal. However, Turner states, “Whereas a narcissist may occasionally harm people as a consequence of their self­-prioritization, the harm they cause to others is usually unintentional.” Since they are so obsessed with themselves, they do not think about who they are hurting in their process of becoming famous or successful. Turner further explains to Health.com that sociopaths actually “get off” on hurting others, meaning that they hurt and manipulate others intentionally for their enjoyment.