Never Marry This Type of Man Based on Your Zodiac Sign 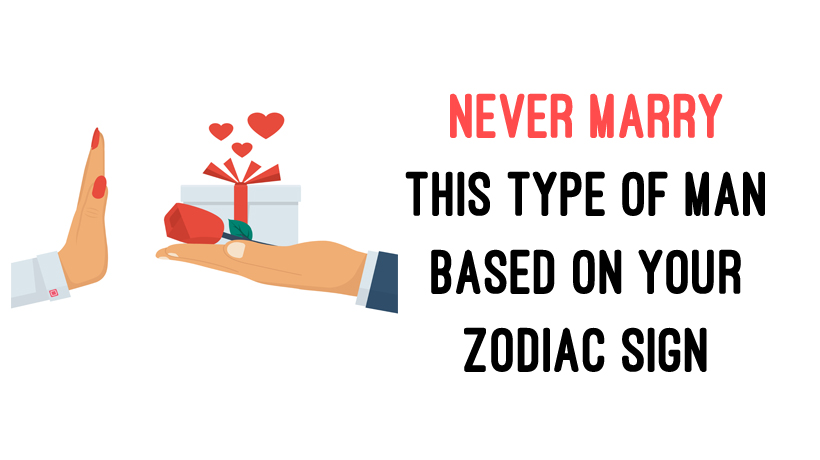 It’s not easy to decide whether the person you’re with right now is the one who you can picture growing old with. Think of your own personality traits when you consider the types of people you get along with the most and the least. This will allow you to see if he’s the right person to marry – or not.

Aquarius (January 20th-February 18th)
As an Aquarius, you are free-willed and independent. You value your ability to be your own person over everything. Because of this, you wouldn’t mesh well with a man who tries to control you.

Pisces (February 19th-March 20th)
You have a pure soul, and you have no problem giving all of yourself to another person who you care deeply about. You should never commit to someone who takes this for granted – or worse, tries to make you feel small.

Aries (March 21st-April 19th)
As a highly ambitious woman, you should be with someone who will support you on your path to success rather than stand in your way. If you feel as though he’s holding you back from reaching your goals because he feels intimidated by them, it might not be the best idea to take the next step with him.

Taurus (April 20th-May 20th)
If there’s anything that a Taurus can’t stand, it’s a reckless and irrational person – someone who has no regard for how their actions might affect others. If you’re with a man like this, drop him; you need to feel safe and secure with whomever you’re involved.

Gemini (May 21st-June 20th)
Gemini women can go from being cheerful and social to being somber and withdrawn in a matter of minutes. If the guy you’re with can’t handle your varying moods, it isn’t worth it to try and further your relationship. Marry the guy who will be patient with you and accepting of the person that you are.

Cancer (June 21st-July 22nd)
As a Cancer, you have an incredible ability to tune into exactly how another person is feeling. However, you have a slight problem doing the same with yourself. Any man who tries to brush off how you’re feeling, or who doesn’t even try to understand where you’re coming from, is highly toxic.

Leo (July 23rd-August 22nd)
Leo women take pride in the people they are. If any man tries to undermine your dignity or sense of self-worth, get rid of him. You deserve to be treated like the queen that you are.

Virgo (August 23rd-September 22nd)
Virgos need to be with people who support them fully. You have the tendency to worry about everything, even the smallest things. If you’re with someone who doesn’t make you feel confident, drop them.

Libra (September 23rd-October 22nd)
Selfish people drive you crazy. You have a big heart, and you always think of what you can do to help other people, which is exactly why you should never get involved with a man who only thinks of himself.

Scorpio (October 23rd-November 21st)
Scorpio women are highly resourceful people. You are a big proponent of taking action if you feel passionate about something. This is why you shouldn’t get further involved with a passive man – he’ll only frustrate you in the long run.

Sagittarius (November 22nd-December 21st)
You are a free and creative soul. You don’t like feeling trapped in relationships –  steer clear of men who don’t respect your boundaries.

Capricorn (December 22nd-January 19th)
Your work ethic is stronger than most people you know. You carefully think through every decision you make and you work hard at achieving your goals. This is why you wouldn’t mesh well with an impulsive man – your attitudes towards life may clash.