Do You Overanalyze Potential Partners Based on Your Zodiac Sign 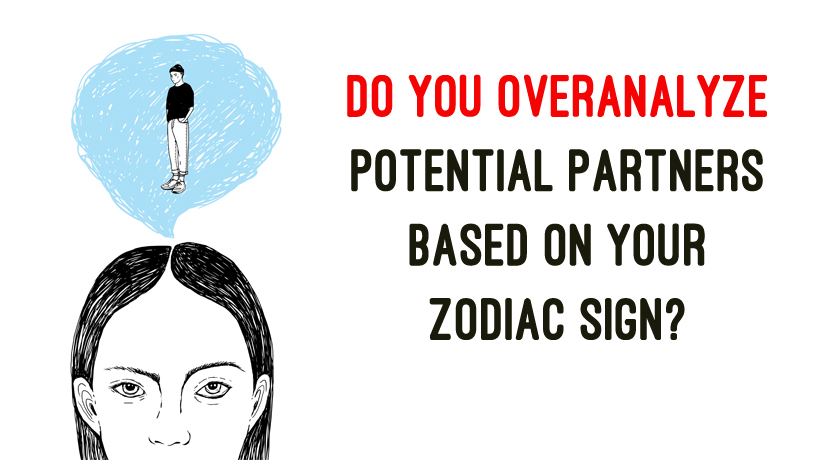 While it’s never a good thing to actively overlook alarming behaviors, the impulse to overthink every small detail of an encounter is truly dangerous to your love life. This is what your zodiac sign can tell you about how you handle your suspicions when it comes to potential partners.

Aquarius (January 20th-February 18th):
Because you shy away from expressing your feelings as a method to protect your heart, you often think too deeply about any given situation that involves revealing yourself to men. You want to be careful about your secrets, but this makes you seem uncomfortably analytic.

Pisces (February 19th-March 20th):
Most of the time your intuition doesn’t fail, but you can sometimes mistake your instincts with analytical behavior. You don’t have to weigh every aspect of a potential partner in order to be happy; you should instead allow the men in your life the chance to tell you who they are.

Aries (March 21st-April 19th):
Honestly, you’re usually too busy to have the time it takes to analyze. You’re more focused on the adventurous sides of the men you meet, which can be a great thing until you fail to consider some suspicious behaviors.

Taurus (April 20th-May 20th):
While you don’t overanalyze as a whole, you really take into consideration any activity that you believe will cause spontaneous changes in your life. You’ll spend all night thinking about how your date mentioned that he hates having a routine, but you’ll ignore almost everything else.

Gemini (May 21st-June 20th):
You can barely make a choice to save your life let alone worry about the hidden meaning behind a potential partner’s actions. Even if you did spend too much time thinking about a small detail, you wouldn’t be able to decide what it actually means.

Cancer (June 21st-July 22nd):
You can’t help but overthink everything that the man in your life does; it’s just your nature. You’re so suspicious of new people that you result to evaluating every little phrase, opinion and joke that comes out of a guy’s mouth in order to know if he can be trusted.

Leo (July 23rd-August 22nd):
You’re much more concerned with yourself than others, which means that you’d prefer potential partners to analyze you (and your greatness). Even in your most self-conscious states, you’re more likely to write people off who fail to please you rather than overthink everything that went wrong.

Virgo (August 23rd-September 22nd):
Your practical nature often bleeds into your love live. You’ll do just about anything before you ask a guy to clarify something he said, so you just end up analyzing every possible meaning of an exchange.

Libra (September 23rd-October 22nd):
You’re always levelheaded, and this is very useful when it comes to your dating life. Rather than overthinking the small stuff, you give the men in your life a fair chance. You believe that analyzing the “what ifs” is a waste of time, for you take everything at face value and roll with it.

Scorpio (October 23rd-November 21st):
When you first meet a guy, you allow your stubborn and distrusting nature to get the best of you. You truly fear that men will use your secrets against you, and therefore you try to pick out suggests of dishonesty anywhere you can through some hardcore analysis.

Sagittarius (November 22nd-December 21st):
Truthfully, you don’t care enough to overanalyze. You’re much more concerned with a potential clinger than the hidden meaning behind a guy’s statements. You’d rather explore the world and let the chips fall where they may.

Capricorn (December 22nd-January 19th):
Your tendency to expect the worst in others doesn’t make you analytical, but it can cause you to force the wrong image onto a potential partner. You don’t really overthink a guy’s behavior, but you will always anticipate that he’ll make the wrong choices.