What People Unfortunately Misunderstand About You Based on Your Zodiac Sign 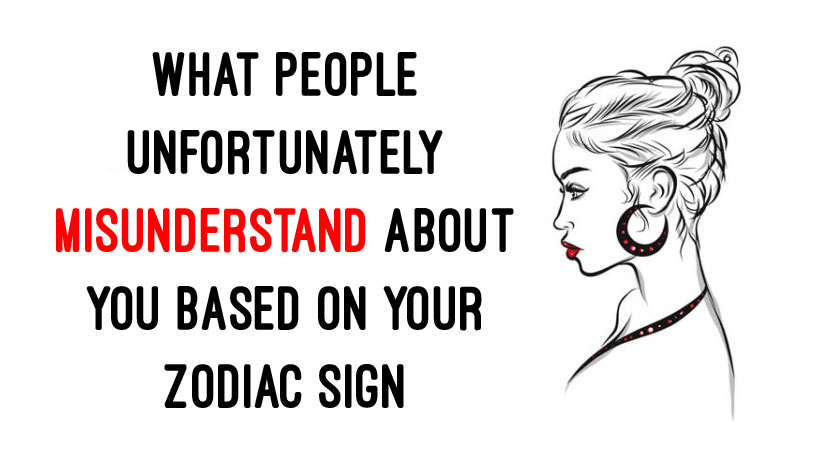 Do you ever feel like people jump to conclusions about you based on how you act? People may assume the things you say or do define the essence of who you truly are. But you are more than what they think. Here are some common misconceptions that people might have about you according to your zodiac sign.

Aquarius (January 20th-February 18th)
You have the desire to go off by yourself and follow your own path – you rely on no one. Because of this, others might see you as cold and aloof, but don’t let this get to you. People see how you act and are intimidated by your strength. They confuse your incredible independence as standoffish behavior.

Pisces (February 19th-March 20th)
As a Pisces, you may be hyper-aware of how other people are feeling – your sign is the most empathetic and considerate of the zodiac. Unfortunately, some people might think that it’s OK to walk all over you – but they’re severely mistaken. You’re sensitive, but that doesn’t mean you won’t stand up for yourself.

Aries (March 21st-April 19th)
You tend to get angry when there’s an obstacle in the way of your success. When people see you get frustrated, they might assume that this is all that you are – hot-headed and easily angered. People take your anger personally, but you know that you’re really only upset with yourself (not them).

Taurus (April 20th-May 20th)
As a Taurus, you may keep your inner circle small. Having a few close friends allows you the sense of stability that you need to feel at peace. Sometimes, you can be wary of accepting new people into your life. This is why the greatest misconception about a Taurus is that they’re unfriendly and unwelcoming.

Gemini (May 21st-June 20th)
It’s true that you love to have fun – sometimes, this is the first thing people think of when they think about Geminis. Most people don’t know that you have a quiet, reserved side too.

Cancer (June 21st-July 22nd)
People tend to think that just because you’re in tune with your emotions, it automatically means that you’re overly sensitive. You feel deeply, but you’re not as emotionally unstable as people make you out to be.

Leo (July 23rd-August 22nd)
The first thing that people misjudge about you is that you are someone who always needs to be in the center of everything. This is a common stereotype for Leo women. However, Leos know that they only want to be respected and valued; they don’t beg for attention from anyone.

Virgo (August 23rd-September 22nd)
Everything that a Virgo does has a purpose. You’d never do anything unless it will contribute to a greater goal. This is why you have no problem with being blunt. Others can be led to think that you’re cold, but just know it’s because they’re thrown off by how honest you are.

Libra (September 23rd-October 22nd)
You are known for being harmonious and for seeing both sides of a situation. People assume that they can burden you with all of their problems because of this––and when you try and take time for yourself, you’re seen as selfish. It’s true that you love to help people, but you also know the value of helping yourself too.

Scorpio (October 23rd-November 21st)
Since Scorpios may tend to keep all of their emotions bottled up inside, people think they’re indestructible. You are all too aware of how tough you appear to others, but people don’t realize that on the inside, you’re incredibly sensitive.

Sagittarius (November 22nd-December 21st)
As one of the most curious and free-willed of the zodiac, people tend to think you’re flighty. However, you know how to come back to your roots, even if other people don’t think you can.