What Really Upsets You Based on Your Zodiac Sign? 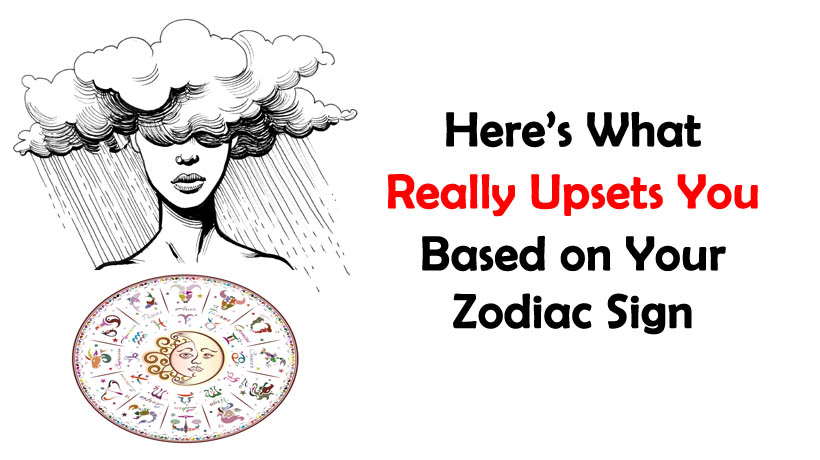 In our daily lives, we run into a lot of unexpected obstacles. Certain ones can trigger some people harder than others. Here is what makes you feel the worst based on your zodiac sign.

Aquarius (January 20th-February 18th)
Aquarius women are notoriously strong. You do your own thing and you won’t take no for an answer. What upsets you the most is when someone places a limitation on your independence –  whether in the workplace or in a relationship.

Pisces (February 19th-March 20th)
You hate it when you turn on the news and see that another act of cruelty has taken place. Since you are by far the most compassionate of the zodiac signs, you can’t stand seeing people being mistreated.

Aries (March 21st-April 19th)
Since you are so determined, you tend to set high standards for yourself. You will feel most unhappy if you feel like the work you’re doing is menial, or that you’re not living up to your full potential.

Taurus (April 20th-May 20th)
Due to your grounded nature, you may be upset when experiencing unexpected changes. This can make you irritable and anxious. Nobody likes to feel this way –  however, it’s a bit worse for Taurus, since they depend on a sense of stability to thrive.

Gemini (May 21st-June 20th)
Geminis like to go with the flow and do what they please. Because of this, it disturbs you the most when people try to control you.

Cancer (June 21st-July 22nd)
Cancer women feel deeply. They are highly emotional and sympathetic people. It makes you feel awful to think that you could be taken advantage of. You hate that people think they can walk all over you, just because you’re more sensitive than they are.

Leo (July 23rd-August 22nd)
Your sign adores being in the center of everything. You hate it when people look right through you. Being ignored or “invisible” to others is the worst feeling in the world for a Leo.

Virgo (August 23rd-September 22nd)
Since Virgos tend to be highly analytical, people sometimes perceive them as cold or heartless. However, Virgos know that this is the farthest thing from the truth! They simply struggle with expressing their feelings at times. You are most upset when people underestimate your emotional capacity.

Libra (September 23rd-October 22nd)
As a Libra, you are diplomatic and fair. You sometimes find it hard to choose which side you stand on concerning certain issues. You feel the most frustrated when you are indecisive.

Scorpio (October 23rd-November 21st)
Scorpios have trouble opening up to people. It takes a lot of hard work and time to finally gain your trust. That’s why what upsets you the most is when people betray you or deceive you.

Sagittarius (November 22nd-December 21st)
Sagittarius women are curious people. You crave the freedom to explore and the excitement that it brings. What you loathe the most is feeling like you’re stuck in a set, mindless routine.

Capricorn (December 22nd-January 19th)
Since you are so disciplined and responsible, you hate it when something gets in the way of you reaching your goal. You are a realist – you know that these things happen. However, it still makes you upset when you feel as though you won’t be able to follow through on a promise (made to yourself or to others).