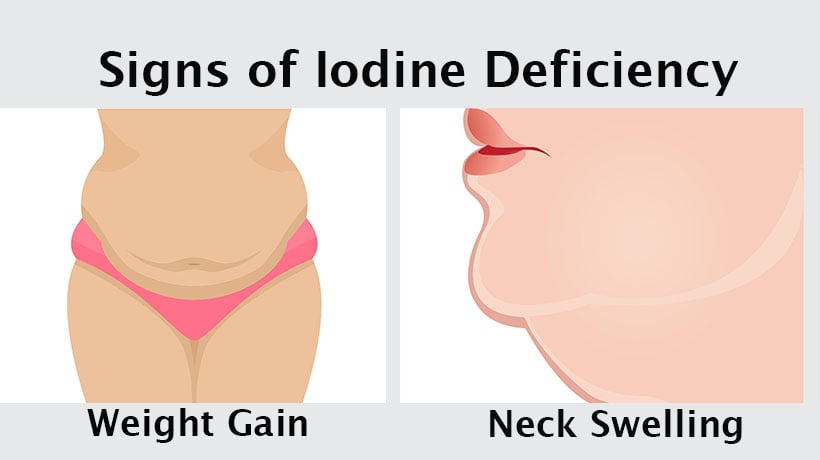 The upper Midwest and Great Lakes regions of the US and Canada used to be known as the “goiter belt,” according to the American Thyroid Association (ATA). A goiter is an abnormal enlargement of your thyroid gland and it’s a classic symptom of an iodine disorder. Due to the lack of iodine in their diets, people living in that region reported higher cases of goiters.

By the 1920s, iodized table salt became much more prevalent. Iodine deficiencies are relatively uncommon in the US. However, worldwide, almost a third of the world’s population is at risk for an iodine deficiency, according to a 2017 report in the journal Nutrients. Here’s what you need to know.

What is exactly is iodine?
Iodine is an essential mineral commonly found in seafood because it’s naturally present in soil and seawater. The Office of Dietary Supplements (ODS) from the US government says the body needs iodine to make essential hormones for the thyroid, which control metabolism as well as bone and brain development during pregnancy and infancy.

What are the signs of a deficiency?
A goiter could be the most obvious sign of a deficiency. The thyroid is located in the neck, so a person could detect it by abnormal swelling in the front of the neck.

Since the thyroid can’t function properly without enough iodine, a deficiency might be the cause of unexplained weight gain. The health resource website Healthline says low iodine levels can slow metabolism and encourage food to store as fat. Fatigue, weakness, and hair loss might also appear.

How do I get more iodine?
Western diets are usually high in iodized salt, but for individuals with certain dietary restrictions or people who live in different regions, iodine deficiencies are much more common. The ATA says iodine is common in dairy products, eggs, fish, seaweed, shellfish, soy milk, and soy sauce. Vegans, vegetarians, and anyone cutting back on salt in their diet are at a higher risk of iodine deficiency.

Unlike most other vitamins and minerals, iodine isn’t listed in most nutritional fact labels. Iodine levels can vary dramatically and determining how much iodine is available can be difficult. If iodine doesn’t occur naturally in your diet, there are also iodine supplements available. Talk to your doctor about the right diet for you.