Reinventing the Recipe for Success 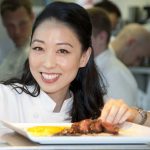 From a young age, Judy Joo was encouraged to be a leader. She attended an all-girls school from kindergarten through 12th grade, which she says gave her many opportunities to flex her leadership muscle. Judy was involved in student council and the school newspaper, and captained the field hockey and lacrosse teams.

Taking the initiative has not been a problem for her. In fact, she reinvented herself several times—from an engineering student as an undergraduate to a career in financial services. But despite her success, Judy felt unfulfilled. Her lifelong passion was cooking, so she enrolled in culinary school to become a chef.

“When I had time off, I always wanted to read cookbooks. I was constantly exploring new restaurants, wanting to know what successful chefs were doing. I didn’t like my current job—that was the catalyst. Trading fixed income derivatives wasn’t my thing. I had always loved the world of food and I thought, ‘Life is too short not to do what you love.’”

Judy’s parents expressed reservations about the idea, fearing that she was “downgrading” her career by leaving a lucrative field.

“Most people go back to school to earn their MBA or add letters to their name. I was arguably going to make less money and work longer hours. And without the support of my parents, it was a lot to swallow. But I just had to do it.”

Her leap of faith has paid off. After working at a number of upscale restaurants, including several owned by celebrity chef Gordon Ramsay, Judy was selected to be an Iron Chef on the UK version of the show. Her popularity led to a spot judging on Iron Chef America and Next Iron Chef. She hosts Korean Food Made Simple on the Cooking Channel.

Another passion of Judy’s is promoting healthy eating among children. Along with a girlfriend, she founded Harvest Time in Harlem to educate fourth and fifth-graders. The program teaches them about nutrition and demonstrates basic cooking skills. Today, the school hosting the program maintains a garden and farmers’ market, and has regular cooking demos.

“It was one of the most rewarding experiences of my life. When we started out, we’d ask the kids questions like, ‘Where does honey come from?’ and they’d answer, ‘Bears.’ Many of them couldn’t identify a fresh head of broccoli. But they really enjoyed learning about the connection between the ground and the table.”

Moving forward, Judy’s projects will include publishing her first cookbook and she’ll be opening her own restaurant, Jinjuu, in London early this year.

Competing on Iron Chef is very stressful, but judging has been a lot of fun. It has given me the chance to enjoy a lot of great food. And with Korean Food Made Simple, I’ve traveled to parts of South Korea that even my relatives who have lived there their entire lives haven’t visited.

Her favorite dish to prepare…

I know it sounds really weird, but tofu is one of my comfort foods. I enjoy eating it and making it in all forms—steaming it, frying it, using it in soups.

It doesn’t have to be perfect. It’s about cooking with love. Find out what you can about nutrition, and learn the basics of food preparation. You don’t have to follow an exact recipe or a precise diet.