Selfish or Selfless? Here’s What You Are Based on Your Zodiac Sign 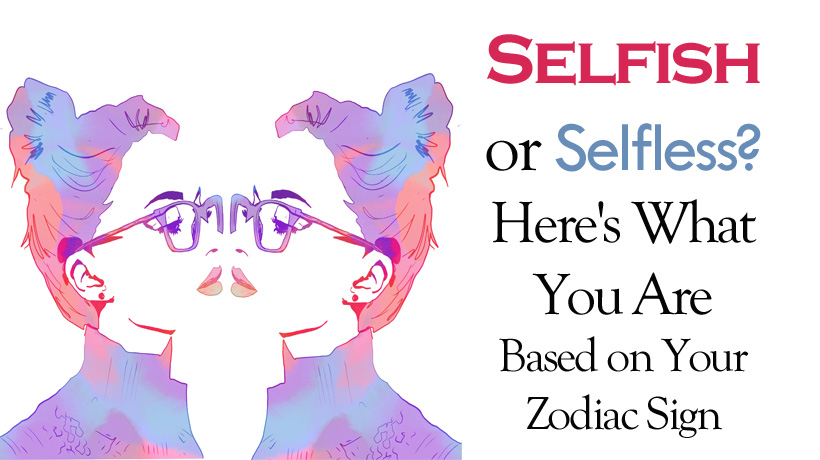 What’s yours is mine, and what’s mine is…also mine, or however that phrase goes. We all know someone who thinks like this, and it may even be you! It’s not a crime to put yourself first, and sometimes it’s necessary for your mental or physical well-being. But some people can go too far and completely ignore the wants and needs of others. Are you the type that constantly thinks of others before themselves, or do you have no problem putting yourself first? Here’s what you’re most likely to be based on your zodiac sign.

Aries (March 21st – April 19th): Selfish
If you’ve ever had an argument with an Aries, then you already know where this is going. This hot-headed fire sign often has trouble recognizing others’ feelings or point-of-view. Competitive Aries believes that they’re always right and the best at everything they do, so they tend to dismiss the opinions of others pretty quickly in favor of their own.

Taurus (April 20th – May 20th): Selfish
Taureans can be as selfish as they are stubborn. Though they’re reliable, their need for comfort and stability in life can lead them to fetishize money or material goods and alienate family or friends who get in the way. They also may have trouble parting with long-held beliefs, making others feel like they’re talking to a brick wall.

Gemini (May 21st – June 20th): Selfish
Geminis may be fun to hang around, but don’t expect them to be a reliable friend. This air sign is known for switching up their behavior as it suits them. They may be caring and understanding one moment, and completely unyielding in the next. They’ll also expect you to be okay with this.

Cancer (June 21st – July 22nd): Selfless
Cancers can be incredibly caring, sensitive, and emotional. They often take on the problems of others as their own, and love to take care of those closest to them. They’re the type of friend to bring you a batch of homemade soup when you’re sick, and honestly, they’d probably feed it to you, too.

Leo (July 23rd – August 22nd): Selfish
It’s no secret to the rest of the zodiac that Leos can be all about themselves. They crave attention and spotlight, and like Aries, strive to be the best at everything they do (though they’ll probably have a killer outfit instead of a killer debate rebuttal). But if Leo could learn to check their ego at the door, they’d actually have a lot of love to give.

Virgo (August 23rd – September 22nd): Selfishly selfless
A Virgo will do anything to help a friend or loved one–but not without expecting something in return. This earth sign is most definitely keeping a tally of everything they’ve done for you, and they’ll expect it all to be reciprocated at some point. For this reason, Virgo is selfishly selfless. Yes, they’ll give; but you better have something to give back.

Libra (September 23rd – October 22nd): Selfless
Libras hate confrontation and have a desperate desire to be liked by everyone around them. They can also be codependent, and their need to keep and please their partner causes them to be very giving. Libras also love to stand up for an underdog, and will step up to be advocates when no one else will.

Scorpio (October 23rd – November 21st): Selfish
A Scorpio is always looking out for their own best interest. They’re obsessive and particular about their personal goals and ambitions, and they’ll usually believe they’re in the right, but they won’t make a fuss about it. This water sign will quietly keep their guard up, and won’t let it down until they’ve learned all of your secrets (but told you none of theirs).

Sagittarius (November 22nd – December 21st): Selfish
Sagittarians are usually optimistic, easy-going individuals with bright personalities and inquisitive minds. But all that curiosity leaves them in flight mode, flaking on others in favor of their own personal interests. This fire sign’s need for freedom causes them to leave others out of the equation altogether.

Capricorn: (December 22nd – January 19th): Selfish
Capricorns are a my-way-or-the-highway type of sign. They’re determined, relentless, and hungry for success. Though they will be willing to offer up advice to their friends or family from time to time, they’re usually more concerned with their own business. Literally.

Aquarius: (January 20th – February 18th): Selfless
Aquarians are the humanitarians of the zodiac, and they love a good cause. They are a true friend of the people, and though they value their independence, they’re willing to set it aside to help a friend in need. However, don’t use Aquarius as your shoulder to cry on too often. Emotions can make them uncomfortable, and it’s likely they’ll disappear if you seem too sensitive.

Pisces (February 19th – March 20th): Selflessly Selfish
If Aquarius is willing to fight for the cause, Pisces is willing to die for it. These water signs will take being selfless to a whole new level, going above and beyond to please the people they love. However, they tend to get wrapped up in the drama of their emotions, which can cause them to selfishly retreat into their head or play the victim card.