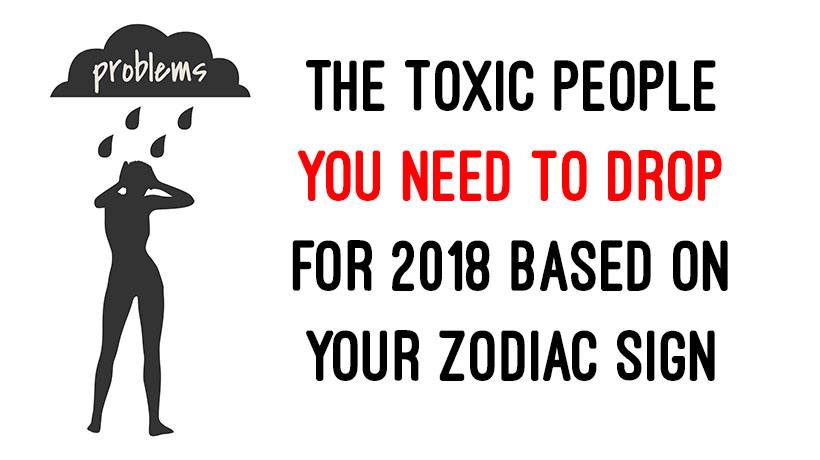 The new year is right around the corner – and that means new opportunities for a fresh start. If you feel like certain people have been dragging you down this year, now is the time to remove them from your life. Here’s who you need to say goodbye to in order to make room for better connections in 2018.

Aquarius (January 20th-February 18th)
Aquarius women place a high value on the freedom to do their own thing. Anyone who tries to tell you that you can’t do things by yourself is toxic – so prove them wrong.

Pisces (February 19th-March 20th)
As a Pisces, you have a gentle and creative soul. You take what people say about you very seriously, which is why you need to distance yourself from those who make you seem like you’re not good enough.

Aries (March 21st-April 19th)
You’re known for your drive to succeed. Your determination and ambition set you apart from many of your friends, causing some of them to be quite jealous. You don’t need to surround yourself with people who won’t feel happy for you when something goes your way.

Taurus (April 20th-May 20th)
As a Taurus, you thrive on stability and honesty – which is why in 2018, you should focus on cleansing yourself of anyone who is consistently unreliable.

Gemini (May 21st-June 20th)
Geminis love to let loose every once in awhile – who doesn’t? If you have people in your life who judge you based on how you’re spending your time, drop them. It’s none of their business,  you don’t need that kind of negativity.

Cancer (June 21st-July 22nd)
Cancer women can be very sensitive – but that’s just because they feel everything deeply. Cut out anyone who sees you as weak or vulnerable; it is those who are most in tune with their emotions that are the strongest.

Leo (July 23rd-August 22nd)
You’re known for your incredibly friendly nature. You’re good-natured and outgoing, but you have a backbone; drop anyone who tries to take advantage of your openness.

Virgo (August 23rd-September 22nd)
Virgos tend to overanalyze everything already. Distance yourself from anyone who maliciously tries to fill you with even more self-doubt.

Libra (September 23rd-October 22nd)
As a Libra, you are known for your skills to compromise. If there’s anyone in your life who argues with you simply for the sake of arguing, drop them. They’re only doing this because they know it’ll get under your skin. They won’t do anything to serve you, so let them go.

Scorpio (October 23rd-November 21st)
Those who know you best have been friends with you for a while, and they understand how hard it may be for you to open up to others. However, if you have that one friend who keeps prying without respecting your boundaries, they might not really be a true friend at all.

Sagittarius (November 22nd-December 21st)
Your intense curiosity and desire to discover more about yourself and the world are what make you unique. In 2018, rid yourself of anyone who tells you that your idealistic way of thinking is wrong.

Capricorn (December 22nd-January 19th)
Like Aries, you’re incredibly hardworking and driven. Remove anyone from your life who tries to block your path to success.