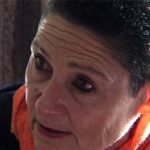 Growing up in South Africa, Robi Damelin was an advocate for social justice early on. When she was 5 years old, she saw a man delivering milk beating his horse. As a consequence, “My friend and I stole the horse and took it home. My father almost had a heart attack seeing the animal on his tennis court,” she says.

Robi’s activism has always been there, but after her son David was shot and killed by a sniper in the Middle East, she used all her energy to fight for change.  He was serving in the Israeli army and she remembers, “The first words out of my mouth were, ‘Do not take revenge in the name of my son.’”

When the press interviewed her at the time of the incident, she became vocal and advocated for the Israelis to leave the occupied territories. The Parents Circle, an organization of parents (both Israeli and Palestinian) who had lost their children as a result of the war, reached out to her. Robi recognized she shared the same pain as any other mother who had lost their child, and realized that their pain could become a catalyst for change.

Although not immediately, she was able to reconcile with the man who murdered her son. After he was arrested, she wrote him a letter. Robi recalls, “Once I’d written the initial letter it was like giving up being a victim, it was totally freeing, like a stone was taken off my heart. I was no longer dependent on how he would react.” It would be two and a half years before she heard a response—and it was not a kind one. Many expected Robi to be enraged, but she wasn’t. Eran, her surviving son, commented that in times of conflict, reconciliation can be the place to begin a dialogue.

Robi has been actively working with The Parents Circle, the group where she initially found solace. Having had a career in public relations, she has used her skills to take their work to the next level. “I had always trained others to talk to the media; suddenly I found myself on the frontlines.” Her creativity has been the source for some of the exhibitions, like Cartoons in Conflict, and The Presence of the Void Exhibition.

When asked how others can help, Robi says, “Don’t take sides. Don’t be pro-Israel or pro-Palestine. What you’re doing is importing our conflict into your country and creating hatred between Jews and Muslims.” For now, Robi wants you to know that peace and reconciliation are possible.

Always a firecracker for social change
When I was seven, I was in a boarding school in South Africa during Apartheid. At the time, the Chinese children were considered second class citizens. One day my father took us all to the zoo, and the elephant man wouldn’t let the Chinese children ride the elephant. I went berserk and didn’t allow anyoneto participate.