Two Faces of Narcissism & How to Spot the Difference 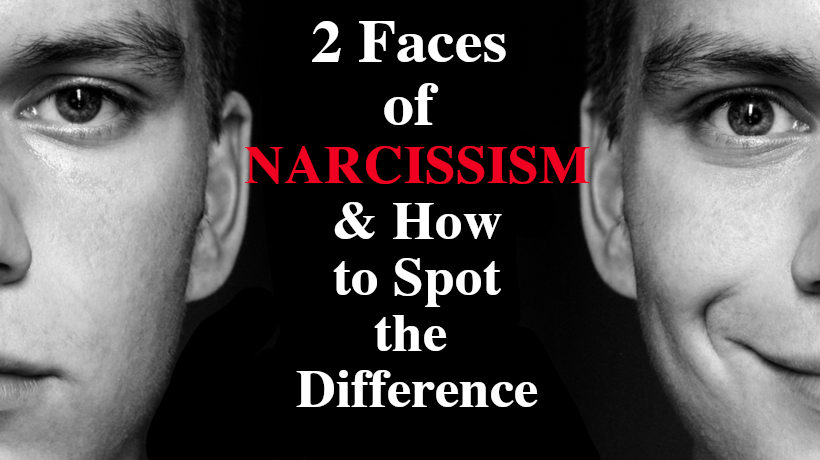 The term “narcissism” has been used and thrown around in the media, making it hard to pinpoint what exactly is narcissism and when is a person actually exhibiting narcissistic traits. While most people have some degree of narcissism intertwined with their personality, as W. Keith Campbell, Ph.D., and Carolyn Crist suggest, there seems to be more to narcissism than we originally thought.

Campbell and Crist’s new research book highlights and breaks down the different types of narcissism, as seen in the 21st Century. Years of research from psychologists and psychotherapists present the “Trifurcated Model,” which according to Campbell and Crist, “shows how both the grandiose and vulnerable forms relate to the core narcissistic personality traits of antagonism, self-importance, and a sense of entitlement.”

Narcissism can be broken down into two types: grandiose and vulnerable or a combination of the two.

According to the authors, “Grandiose narcissists, for instance, tend to exhibit confidence, boldness, and self-esteem as it relates to their disagreeableness and ego.”

Vulnerable narcissists, on the other hand, are shy and anxious. They tend to have low self-esteem and low self-confidence which circles back to their ego and their need to be the center of attention.

The authors provided three examples — one for each type of narcissism — and explain in further detail about the traits they may show.

How to Spot Narcissists

People who have a grandiose sense of self, like the influencer, are often bold and outgoing. People are attracted to them because they are attractive and charming. People leave them eventually because they lack empathy and are everything has to be about them. In bullet form:

Vulnerable narcissists, like the quiet and shy acquaintance, are harder to spot because, on the outside, they may look like introverts. They do not take criticisms well and like to be the center of attention. Here it is in bullet form:

This particular narcissist, as shown in the third example, may be harder to spot because vulnerable narcissists are hard to spot. They will have both qualities of a vulnerable narcissist and a grandiose narcissist. This means that they can be extraverted and ambitious, but may also be defensive and reactive as well as incredibly insecure.

Ultimately, psychologists and psychotherapists are always learning about narcissists. This new model may change the way we think about narcissists, in general. More research needs to be done about this specific model and how it relates to our new understanding of narcissists.

Campbell and Crist say as a last remark, “This new understanding of narcissism has the potential to change the cultural conversation around narcissism, too, and how it operates in society today.