Under the Covers: The Truth Revealed About Couples’ Bedroom Behavior 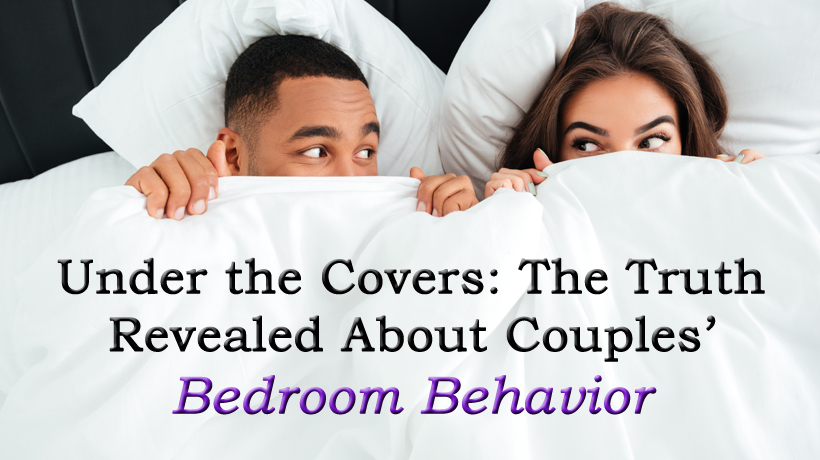 In the moment, you might enjoy hearing your partner say, “Shh . . . don’t say anything.” But when that happens, there are a lot of unanswered questions.

That’s why looked into the most common habits of sexual activity. Although everyone has different tastes, we looked into studies, surveys, and interviews with sex therapists to determine what goes on behind closed doors.

Number of partners
Asking your partner how many sexual partners they’ve had is a private question, and it’s their prerogative to not answer it. Even so, some people tend to either inflate or minimize the number they tell people to protect their reputation.

The best research regarding the number of sexual partners was conducted in 1988, but we couldn’t find any other major research since then. However, a 2017 study by Superdrug, a U.K.-based health and beauty retailer, surveyed over 2,000 men and women from around the world about their sex life. They found the average number of partners for women was seven, while men averaged 6.4 partners.

Sexual frequency
How many times a week do most couples “do it?” Well, that depends on the age of the relationship, schedules, health, and several other factors.

The International Society for Sexual Medicine’s reported some statistics from the Kinsey Institute’s 2019 National Survey of Sexual Health and Behavior, based in the United States. According to their report, just under half of both men and women between the ages of 25 and 59 had sex a few times per month to weekly, more than their single and partnered peers.

Don’t know partner’s preferences
Marty Klein, Ph.D, is a certified sex therapist and a licensed psychotherapist. In his article for Psychology Today, he says his experience suggests many people don’t communicate enough about what their favorite positions and styles are, nor what their needs might be.

“Asking about someone’s preferences—and believing them—is the easiest way to improve our sexual experiences,” he says.

And while it’s hard to measure how well people communicate with their partners, a few surveys suggest many adults can do a better job. A 2012 survey by Durex says 50% of sexually active people are “dissatisfied” with their partner’s performance, as reported by Verywell Mind, a partner of the Cleveland Clinic. More specifically, a 2011 Woman’s Day survey says 48% of women have faked an orgasm.

Not sober
“Many people are not sober during (or before) sex,” says Dr. Klein. This may be because alcohol loosens inhibitions, he says. Moreover, many people may feel they perform better under the influence, causing them to drink more.

A 2010 paper in the journal Psychology of Addictive Behaviors detailed research about the relationship between sex and alcohol use between 1990 and 2010. In it, they estimated a quarter to half of the people surveyed in the mid-90s had been intoxicated the last time they had sex.

Despite these common trends, Dr. Klein says there isn’t one way to have a “normal” sex life.