What Do Nightmares Mean? The Science Behind Why Some Dreams Are So Disturbing 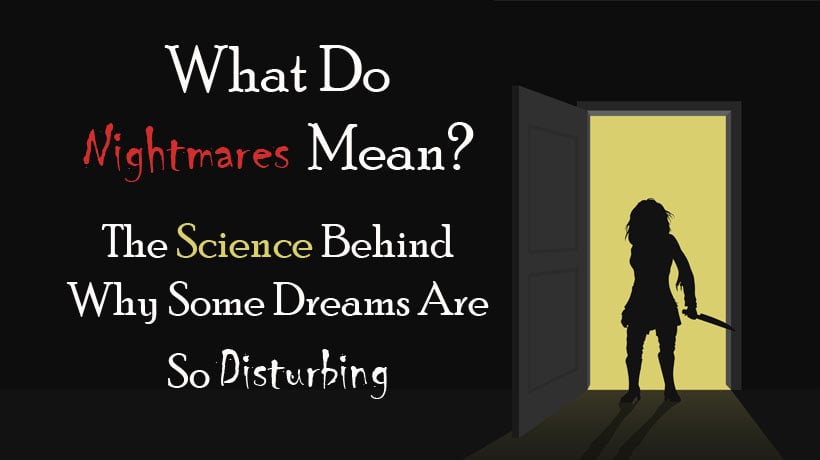 Nightmares can come in many different shapes or forms, such as being chased or repeating a traumatic event that occurred in one’s life. What do these nightmares mean and why do we have them?

What is a nightmare?
According to the website Everyday Health, nightmares are a type of dream that cause you to feel anxiety, fear or terror. A person will usually wake up during or after having a nightmare, and they will be able to clearly remember all or part of the nightmare. Nightmares tend to occur during the rapid eye movement, REM, cycle of sleep.

Science behind nightmares
Nightmares usually occur when REM sleep is the strongest, according to the website American Family Physician. Our sleep is divided into four stages: the first stage is sleep onset, the second stage is our light sleep and the third and fourth stage is where we are in deep sleep, which is also called REM sleep. REM sleep occurs every 90 minutes during the night, and is associated with; high brain activity, rapid eye movements, and inhibited voluntary motor activity. Typically, dreaming occurs in all stages, with 80 percent of people awake during REM sleep and sleep onset, while 40 percent of people are woken up  from a deep sleep.

What causes nightmares?
There isn’t one reason as to why we have nightmares, as it can be interpreted in many different ways. According to the website WebMD, there are different ways in which we increase the chances of experiencing nightmares.

Sometimes, it can be as innocuous as having a late-night snack, which can increase metabolism and signal the brain to be more active. Other times, a number of medications are known to contribute to nightmare frequency as well. Drugs that act on chemicals in the brain, such as antidepressants and narcotics, are often associated with nightmares. Withdrawal from medications and substances, including alcohol and tranquilizers, may trigger nightmares.

Psychological triggers can also be the cause of many nightmares. For example, anxiety and depression can cause nightmares. Post-traumatic stress disorder, PTSD, also commonly causes people to experience chronic, recurrent nightmares.

Finally, Nightmares in adults can be caused by certain sleep disorders, such as sleep apnea and restless legs syndrome.

Why do we have nightmares?
Most young children are susceptible to nightmares, and a number of adults also experience nightmares in their lifetime, according to the website Medical Daily. There are certain adults who are more prone to having nightmares than others.

Several studies have found that age, personality type, and trauma can influence the frequency of nightmares for dreamers. Medical Daily discusses a study done by the journal Sleep Medicine where blind people have four times more nightmares than those with vision. The study confirmed the nightmares were associated with emotions that the blind experience while awake, such as the potential of embarrassing social situations and interactions.

Nightmares can depend on past trauma and, even more commonly, personality type, according to Medical Daily. Sensitive people and those who avoid confrontation, are more prone to nightmares, simply because life and choices are more difficult for them.

Types of nightmares
There are a few, common nightmares people tend to share that can signify events that are going on in their lives. Of course, not everyone’s dream means the same thing. However, there are a few common themes in dreams that people share due to stress, anxiety or trauma.

Medical Daily states that death and murder is a very common nightmare. We often tend to dream someone is trying to murder us when we are feeling pressured to end or change something either about ourselves or our lives. Everyday Health discusses how a bad dream about falling, can mean that you feel powerless or out of control, or that you are afraid of failing at something.

A nightmare about drowning means you feel overwhelmed by your emotions. Dreaming about war or a fight could mean that you need to be more assertive in a real-life confrontation.

The most common type of nightmare is that of being chased. Adults commonly find themselves being chased by a stranger; children are more often chased by some type of animal, monster or other nightmare creature. Dream interpreters say that being chased in a nightmare represents feeling that you are being pressured or inhibited in some way.