What Happens to the Body When Drinking Ginger Tea, Hot or Cold, According to Experts 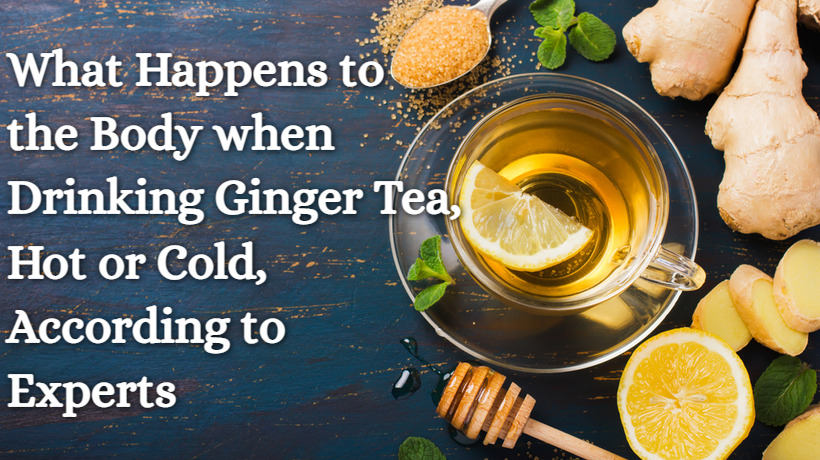 Ginger, despite its sharp taste, can be used as a natural health remedy when sick or in pain. The spice can easily kick up any dish it is cooked in, but it has always been known for its medicinal properties. Native to the Asian continent, it can be consumed both hot and cold and when it is served either way it still delivers its many benefits.

One of its most famous and useful benefits is ginger’s ability to alleviate nausea. If you are ever feeling sick from motion sickness, or you’ve simply caught a stomach bug, drinking ginger tea may help calm any nausea symptoms including dizziness and cold sweats. Though research is limited on ginger’s efficacy over nausea medications, it is still commonly used to treat it.

You may have been told before to drink ginger tea during the winter months if you’ve caught a sudden cold. Ginger contains the substances gingerol and shogaol, which are known to help manage internal inflammation. “Drinking ginger tea can be wonderfully soothing, as it may not only help alleviate nausea, but it can also help control inflammation in the body,” says Amy Gorin, RDN, a plant-based registered dietitian. Inflammation, of course, is the immune system’s natural response to sickness, however, ginger tea has also been linked to a strengthened immune response, and can clear up nasal congestion.

Ginger may also be an aid in managing cholesterol levels. In a 2015 study, patients with type 2 diabetes consumed black tea with cardamom, cinnamon, ginger, or saffron for two months instead of tea alone. The subjects who drank the spices in their tea observed improvements in their total, LDL “bad,” and HDL “good” cholesterol levels.

Drinking ginger tea either hot or cold can also aid in digestion. Ginger is “an important dietary agent which possesses a carminative effect”, meaning it can help relieve gas, according to a study published in 2019 in the Food Science and Nutrition journal . Apart from this benefit, it has been known to reduce pressure on the lower esophageal sphincter, alleviate intestinal cramps, and helps prevent indigestion, gas, and bloating.

Research has also shown that daily consumption of ginger in preventing heart related issues is quite effective. Ginger has been proven to be beneficial in protecting against chronic illnesses, specifically heart disease by lowering blood pressure, improving blood circulation, relieving symptoms of heartburn, and preventing blood clots and even heart attacks.