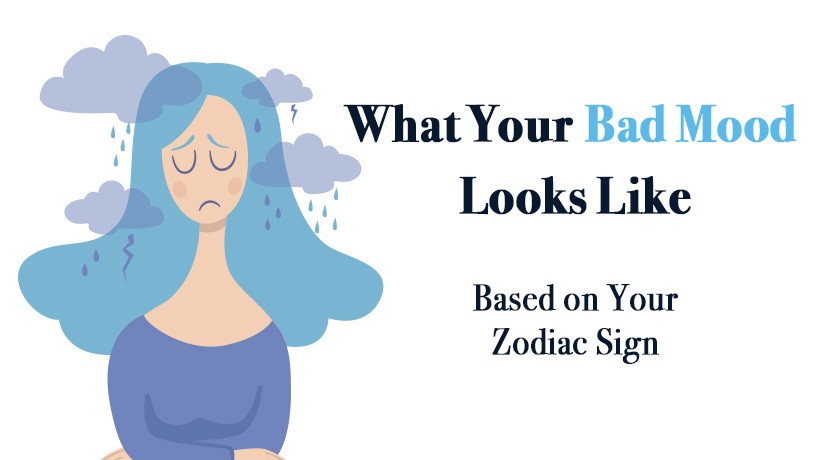 Let’s face it: we’d all love to be able to go through life blissfully ignoring our problems with a smile on our face, but sometimes, you’re just going to be in a bad mood. Whether the traffic you were stuck in this morning caused you to be late to an important meeting, or you have too much on your plate at home, there’s always going to be something that causes you to be a bit less cheerful than usual.

In astrology, sometimes you can predict how a person will act when they’re in a bad mood based on their sun sign or placements in their birth chart. If you believe in the stars, then I’m sure you’re curious to know how your sign typically acts when things aren’t going their way. Well, wonder no longer. Here’s what your bad mood looks like based on your zodiac sign.

When fire sign Aries is in a bad mood, you’ll definitely know. This sign is ruled by Mars, the planet of outward activity and animal passion, which means that their bad moods are as fiery as their personalities. They’re prone to temper flares, outbursts, and impulsivity (particularly when it comes to their finances), so if they’re in a bad mood, you better get out of the way, or else you risk getting caught in the line of fire.

A Taurus is most comfortable when their senses are indulged and their materialistic needs are satisfied. So when they’re in a bad mood, they immediately seek comfort and security the best way they know how. Your local Taurus may use their bad mood as an excuse to “decompress” in bed for six hours, order a gourmet meal that could feed two people, and spend an exorbitant amount of money on a new pair of shoes they just had to have.

As an air sign, Gemini’s bad mood can look a lot like a tornado trapped in a jar. They’ll practically be bouncing off the walls, propelled forward by their negative energy. This sign will be distracted, anxious, and completely on edge. They may even snap at you just for trying to speak to them. You’re better off coming back when their mood has improved.

Cancers practically invented the mood swing. This water sign can be loving and cheerful one moment, and irritated and emotional the next. Symbolized by the crab, Cancers have a tendency to retreat into their shell when they’re in a funk. They’re likely to cut off all contact and go radio silent, leaving family and friends to wonder what’s caused their mood this time. After some time feeling sorry for themselves in isolation, Cancer will emerge sunny and cheerful once again.

Leo is known for their dramatic flair. This sign is often the loudest person in the room, and that fact doesn’t change when they’re in a bad mood. If things aren’t going well for Leo, they will make sure everyone knows. This may take the form of explaining (exaggerating) their bad day to every person they meet at a party, or posting a rant on social media for all to see. Either way, this fire sign will express their bad mood the same way they live their life: in the spotlight.

A Virgo is critical on a good day. So you can only imagine what it’s like for them on a bad day. This sign will be critical of everything and everyone, picking them apart so thoroughly that their target may end up in tears. This earth sign is ruled by Mercury, the planet of communication, so when their mood is sour, you can bet their words will be used to harm instead of charm.

Ever heard of the expression “kill them with kindness?” This is what an unhappy Libra looks like. Sure, it’s all smiles and grace on the outside–after all, a Libra is nothing if not polite–but inside, they’re absolutely stewing. It takes a lot for this air sign to be provoked to confrontation, but don’t let that sunny disposition fool you. This sign will try to manipulate you or persuade you to their way of thinking using their charm. Libra knows you catch more flies with honey than with vinegar.

If there’s one person you don’t want to meet, it’s a Scorpio in a bad mood. And if you’re the one that caused said mood, then it’s best you leave the country (who are we kidding, Scorpio is crazy and will find you). When they’re unhappy, this sign becomes incredibly secretive, possessive, and vengeful. You’ll never know what they’re plotting, and honestly, you probably don’t want to.

It’s hard to imagine our bright, optimistic Sagittarius in a bad mood. But when this sign is in a mood, they start to resemble their fiery counterpart, Aries. They can be reckless, explosive, and hard to pin down. Sagittarians are also the truth seekers of the zodiac. This is great in normal circumstances, but when they’re in a mood, they can deliver some seriously blunt truths no one is ready to hear. Although their mood will dissolve quickly, the things they’ve said will surely linger.

Capricorn’s aren’t exactly known for their warm and caring nature. With this sign, it’s all about the business (and Benjamins, baby). So it’s no surprise that they’re naturally cold. When they’re in a bad mood, this sign can go from cold to downright frigid. They’ll be pessimistic, dark, and unforgiving, so it’s best to avoid them if they’re having a bad day.

Aquarians are social creatures–when they want to be. When this sign isn’t feeling so great, they do what air signs do best: ignore their feelings and detach. An Aquarius will try their hardest to logically sort out their bad mood, and if they can’t, it’ll send them into a tailspin. This sign will be anxious, nervous, and constantly overthinking things if they don’t get their mood under control.

Have you ever been in a bad mood, just to have someone sarcastically tell you to go “cry about it?” Well, Pisces took the advice, and they’re currently drowning in their own tears. Yes, it’s no surprise that this water sign can become pretty emotional when they’re in a bad mood. They’ll wallow in self-pity and turn to self-destructive habits, allowing a tsunami of negative energy to overtake them. Does anyone hear Sarah McLachlan playing in the background?