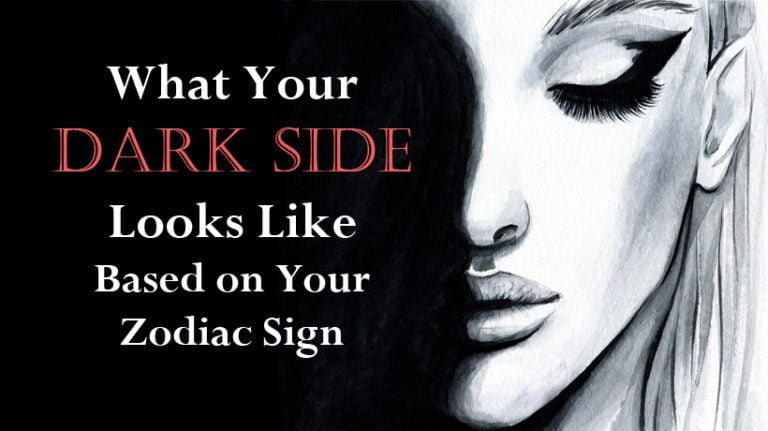 Let’s face it. We all have a dark side, whether it comes out on the first date or the fifth. Some of us are good at hiding it, while others are happier to unleash the darkness and let it roam free.

It doesn’t matter if you’re a Sunny Sally or a Negative Nancy—there’s probably another side of you that others rarely see. In astrology, it is believed that every force in the universe has a balancing counterforce. Getting in touch with our dark side can actually lead to a better understanding of how we affect the people around us, and even ourselves, negatively. While not all of these traits may apply to you, some may resonate with you. Here’s what your dark side is like based on your zodiac sign.

Aries (March 21 – April 19)
Aries is the first sign of the zodiac, full of risk-taking curiosity and wonder. However, the need to constantly be on-the-go can turn Aries into an impatient, impulsive individual. Ruled by Mars, the planet of war, Aries are also often prone to intense fits of anger that pass quickly, leaving their friends holding grudges while they’ve already moved on.

Taurus (April 20 – May 20)
Taurus is a fixed sign—meaning they are stubborn and hate change—as well as a sign that loves comfort. One lazy day in bed could turn into two, then three, until Taurus hasn’t left their house or changed out of their cozy sweats in a week all in the name of “self-care.” Try to take them away from their bed and they’ll become possessive and angry, showing you exactly what the phrase “you mess with the bull, you get the horns” means.

Gemini (May 21 – June 20)
Perhaps the astrology community’s favorite sign to hate, Geminis are almost known more for their bad sides than their good. Ruled by Mercury, the planet of communication, Geminis are real smooth talkers. The downside? They love to gossip and have a pension for lying. Air sign Gemini will leave you with whiplash trying to keep up with their duplicitous antics.

Cancer (June 21 – July 22)
Cancers are usually some of the most sensitive, kind-hearted, and family-oriented people you’ll meet. But, they’re not depicted as a crab for no reason. When Cancer gets into a mood, they retreat into their shell and won’t come out until they’re ready. Their feelings are hurt easily, and they have a hard time letting go. Due to their dislike of confrontation, friends and family may not even know what’s wrong, leaving them to believe that Cancer is just being a moody mess again.

Leo (July 23 – August 22)
You can usually find your local Leo basking in the adulation and affection of their peers. Front and center is where they like to be. But if they aren’t receiving the attention or respect they feel they deserve, fiery Leo will become vain and egotistical, and may even start demanding attention from those around them.

Virgo  (August 23 – September 22)
If you told a Virgo you were making a list of their bad traits, they’d have a meltdown, then insist you send it to them so they could proofread it for grammar mistakes. Virgos are hypercritical, detail-obsessed, and prone to over-thinking. While people think Virgos love to criticize others, it’s really just a distraction from the constant barrage of self-criticizing thoughts they have 24/7.

Libra (September 23 – October 22)
Libras are represented by the scales of justice, and rightfully so. To a Libra, if it’s not fair, it’s not right. This can leave them constantly playing Devil’s Advocate and unable to commit to a decision. This can bleed into their relationships, where they desperately want a romantic partner but have trouble with the idea that there may be something better for them out there.

Scorpio (October 23 – November 21)
Probably the only other sign to truly rival Gemini in astrology community hatred, Scorpios are perhaps the most intense sign of the zodiac. A secretive water sign that packs a punch, Scorpios are deeply emotional, and when hurt can become hell-bent on revenge. As a fixed sign, they’re even willing to wait patiently for their enemy to get their comeuppance. Ruled by Mars, the planet of war, and Pluto, the planet of creative destruction, icy Scorpio will show you exactly why revenge is a dish best served cold.

Sagittarius (November 22 – December 21)
Sagittarians are usually the high-spirited, fun-loving adventurers of the zodiac. For that reason, their dark sides are some of the darkest and most surprising. When a Sagittarius feels humiliated, or someone is being condescending towards them, they can lash out, reminding others that they really are a fire sign. It’s rare that they get to this point, but when they do, watch out. Like Aries, the anger will pass quickly, but the hurtful words they said will linger in the air.

Capricorn (December 22 – January 19)
Capricorns are wildly ambitious, and constantly focused on their work. They sometimes set themselves to unobtainable standards, and will do anything it takes to get there. This could mean pulling others down so they can reach the top. Capricorns can also be self-destructive, and like Pisces, struggle with addictions to drugs or alcohol.

Aquarius (January 20 – February 18)
Ruled by Uranus, the planet of higher thought, Aquarians love to flaunt their knowledge. While it’s true that Aquarians do tend to know a lot, they sometimes develop a superiority complex, refusing to acknowledge the opinions and ideas of others because they believe theirs is better. This can alienate their friends, which in turn hurts friendship loving Aquarius.

Pisces (February 19 – March 20)
The last sign of the zodiac, Pisces encompasses a little bit of every sign that comes before it. Many of their dark sides mirror traits you’d see in other signs. They are sensitive and moody like Cancer, but lack an outer shell to protect their feelings. They can be hard to pin down like air signs, prone to bursts of anger like fire signs, and stubborn like earth signs. Depicted as a fish, they are slippery escapists who often turn to drugs and alcohol to numb their pain.