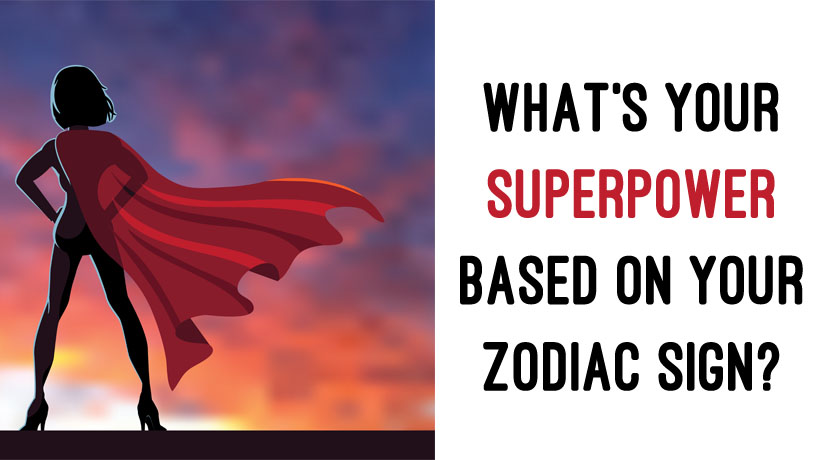 It’s fun to imagine having superhuman capabilities – I know I’d love to be able to fly wherever I want to go. Sadly, these powers aren’t realistic for the majority of us humans. But don’t fear! There are some super cool “powers” that normal people possess that make them stand out. Read below to find out yours (according to your zodiac sign).

Aquarius (January 20th-February 18th)
As an Aquarius, you have the incredible ability to make a name for yourself wherever you are. You’re like a dandelion; able to thrive anywhere, under any circumstance.

Pisces (February 19th-March 20th)
Pisces women have an immense capacity for compassion – you can put yourself in a stranger’s shoes and empathize with exactly how they’re feeling. You make people feel safe and secure around you.

Aries (March 21st-April 19th)
As an Aries, you are both captivating and strong. You are a natural-born leader, but you never abuse this power. People look up to you and admire your ambition.

Taurus (April 20th-May 20th)
Once you commit to something, you never waver from it. You make other people feel like they can depend on you when they need you. Taurus women are also grounded, meaning that you have the ability to look at the world with a healthy dose of realism.

Gemini (May 21st-June 20th)
Gemini women are able to go with the flow in any given situation. Sudden change doesn’t rock your world – in fact, you thrive off of spontaneity.

Cancer (June 21st-July 22nd)
Your sign is full of a mixture of all different types of feelings. This leads you to be incredibly understanding of how others feel when confronted with strong emotions (even if you don’t completely understand how you feel yourself). You’re always the one to offer your shoulder to those who need it.

Leo (July 23rd-August 22nd)
Your superpower is your fearlessness. Like a lioness, you are courageous and protective. People know better than to mess with someone you care about.

Virgo (August 23rd-September 22nd)
As a Virgo, you pay close attention to detail, which is why your power is your ability to fix anything. Whether this be a relationship problem or a broken gadget, Virgos can always be counted on to make something whole again.

Libra (September 23rd-October 22nd)
As a Libra, you strive for peace. The very thought of injustice bothers you so much that you will do everything in your power to make things right again. You are selfless and can always put others first.

Scorpio (October 23rd-November 21st)
Your superpower is your ability to draw people in because of your mysterious nature. You are secretive about many things, and thus compelling.

Sagittarius (November 22nd-December 21st)
Your burning curiosity is infectious. When you talk of your dreams and of your past adventures, you have the ability to make even the faintest of heart want to pursue the unknown.

Capricorn (December 22nd-January 19th)
Capricorn women have an incredibly strong work ethic. Your superpower is that you can zero in on any given task and complete it to the best of your ability.