What’s Waiting for Your Love Life for the Rest of 2019 Based on Your Zodiac Sign? 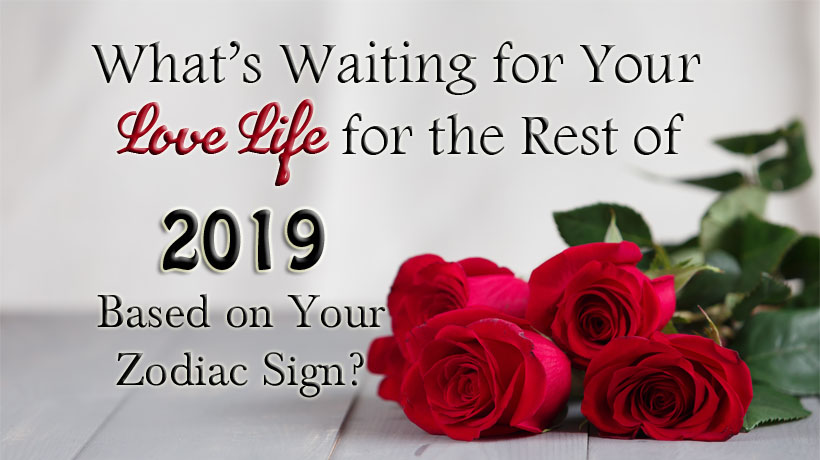 Sometime between Valentine’s Day and wedding season, we start to feel pessimistic about love. Fret not! Due to movement from Venus in 2019, some zodiac signs can expect some positive changes in their love life. Are you one of the lucky few?

Aries (March 21st-April 19th)
Springtime romance is in the air for you, Aries. Venus enters your sign on April 20 this year. You’ll enjoy a mid-year bliss. By October, when the Full Moon is in your sign, you’ll have a clear idea of whether this romance is worth a full commitment or if it’ll be time to move on.

Taurus (April 20th-May 20th)
Don’t panic, Taurus: chaotic Uranus has just moved into your sign and will stay there for a few more years. As a creature of habit, this may scare you. But just because you’re not used to a whirlwind romance doesn’t mean it isn’t good for you!

Gemini (May 21st-June 20th)
We can see your smile, Gemini. If you’re not already in love, you’re probably already hiding a crush on someone you know. Since bountiful Jupiter has been in your sign since last December, you can expect to be lucky in love for the next few months.

Cancer (June 21st-July 22nd)
After the new year, you might be feeling stuck in a rut. This feeling of stasis is likely to continue until your birthday, when a solar eclipse in early July will renew your vigor. If you’ve been flirting with someone, that will be the perfect time for the next step –– and if you’re not feeling the love by then, it’s time to move on.

Leo (July 23rd-August 22nd)
You’re not shy about embracing who you are, but when you feel like people just don’t understand you or your motivations, you’re frustrated. All that will change in June when Mercury, the planet of communication, enters your sign. Finally, your romantic interest will pay attention to your perspectives and needs. That will help you determine if your partner is in sync with you.

Virgo (August 23rd-September 22nd)
Just before your birthday, everything will be coming up Virgo. Mars, Venus, the Sun, Mercury, AND a New Moon will enter your sign within two weeks in August. That’s a lot of attention on you –– and it will make other zodiac signs notice you, too. Just be yourself and let yourself enjoy the ride.

Libra (September 23rd-October 22nd)
While you secretly wouldn’t mind if someone swept you off your feet, you know you can’t abandon your responsibilities and dreams just because you have a crush on someone. What you probably don’t realize is disciplined Saturn’s wedge with Venus in July means you have already started building the relationship with your future soulmate. You might not know it yet, but you probably have already met The One.

Scorpio (October 23rd-November 21st)
If you’re waiting for the opportune moment to make a move, it’s right now. Mercury is in retrograde October 31 to November 20, so unfortunately, things might start going awry around your birthday. You’ll already have enough on your plate, so let your romantic partner know how you really feel before anything else distracts you.

Sagittarius (November 22nd-December 21st)
Sagittarius, you lucky lady. Venus enters your sign not once but twice this year. Your love life around the new year might have given you butterflies, but by November, you’ll get a second chance at romance. Perhaps a new relationship is waiting for you then . . . or maybe a proposal?

Capricorn (December 22nd-January 19th)
Celestial activity is slow to nill near your sign for most of 2019. As a lady with a plan, that’s just how you like it; you hate when things outside of your control rock you. But by the end of 2019, you might want to relax your grip on the reins. A flurry of planetary movement in Capricorn can either flummox you or delight you –– it’s up to you whether you open your heart to it.

Aquarius (January 20th-February 18th)
You haven’t quite felt like yourself this year, Aquarius. You have not one but two ruling planets, but neither Saturn nor Uranus is in your sign for 2019. You may feel like you’re trying to be the “cool girl” to accommodate other people’s tastes. Stay true to yourself for the next few months and you’ll find the right match for you.

Pisces (February 19th-March 20th)
You’ve had coffee dates with that person your friend said was perfect for you. You’ve set aside date nights with your beau. You’ve even listened to that album of weird music your crush likes. You’re doing all the work this year, Pisces, which is why you’ll feel even more shocked when a rush of romance hits you during lunar activity in September. There might be a ring waiting for you.