When to Speak Up and When to Step Back 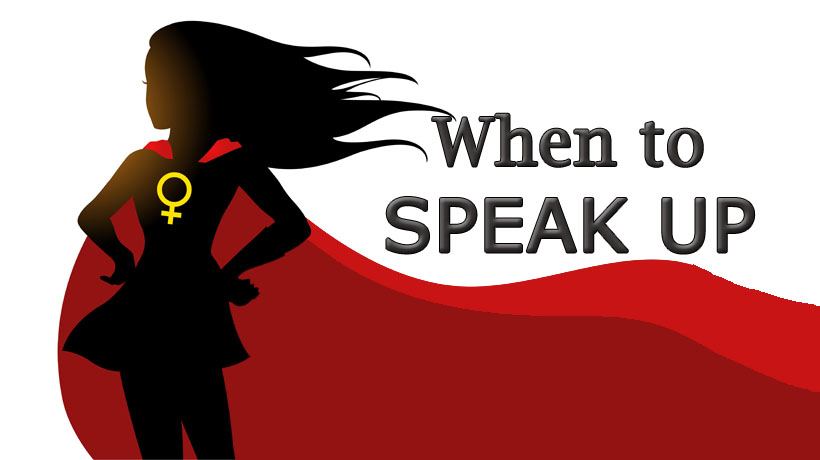 When I think back to my early career, I didn’t always have the confidence to know what to say in areas that are important, like asking for a promotion, a raise, or a project to work on.

Over time, I became more comfortable speaking up about things like finding the right role and working with a good boss. And then I faced a situation where I came back from maternity leave to a drastically reduced role. I felt backed into a corner and had no choice but to speak up and make it clear that I needed a bigger job.

I don’t want people to feel like they can speak up only when they are backed into a corner and have no choice. It’s stressful to let things bubble over to the breaking point. I think women especially should be in the habit of speaking up early and often for the things they want, so they get more of those things and they never feel regret.

Speak up to maintain your point.
You might say something constructive in a meeting, and no one notices. Then, someone else repeats what you said and the group loves it. I think it can happen because someone louder than you restated it and people were more primed to hear it.

Instead of letting that person summarize your perspective, try to say it a different way or build off what was just said. So, something like, “That was a good point. As I just said before, I think….”

Speak up when the timing is right.
I had a mentor in consulting who said to me, “You’re probably ready for your first management role when one of three things happen: a new project comes up where you already have that specific knowledge, you are working with the same client and have an existing relationship, or you’re working with the same team so they’re familiar with your work.”

When all those three things happened at once, I told my boss, “I think I’m ready to manage.” He agreed with me, and that was the first time I actually managed a project. What that experience taught me was to listen to advice and look for when you can implement it.

Speak up when you know you’re right.
In one of my more recent roles, I was trying to roll out digital marketing in a business that hadn’t had a lot of experience with digital engagement.

There was a lot of resistance to it. There was a feeling that the clients weren’t on digital platforms, so we didn’t need to be there either. I had to keep showing them data that demonstrated the clients are there, and we need to be there too, as uncomfortable as that felt for them. We did push through new initiatives and showed real results.

Step BACK when they’ve made up their mind.
If you’ve expressed an idea and your boss simply has a different point of view, there’s not much sense in continuing to beat it down. Sometimes you have to acknowledge you’re not going to win every battle; you have to pick and choose.

Tell us about your family. My husband and I have three children ages nine, seven, and five, and we live outside of New York City.

What was the best piece of advice you’ve received? My father would tell me to keep my options open. Do the very best you can in every situation so that more doors open for you. Especially as you’re starting out, this will give you the credibility to do different things.

What are some of your hobbies? I loved doing broadcast radio in college because I enjoy writing and telling stories. Now that I have children, I like to watch movies and travel with the family.

What is your favorite book? Les Misérables. I love its messages around love, compassion, family bonds, resilience, and the contrast between those who can and can’t forgive.