Which Game of Thrones Character Are You Based on Your Zodiac Sign? 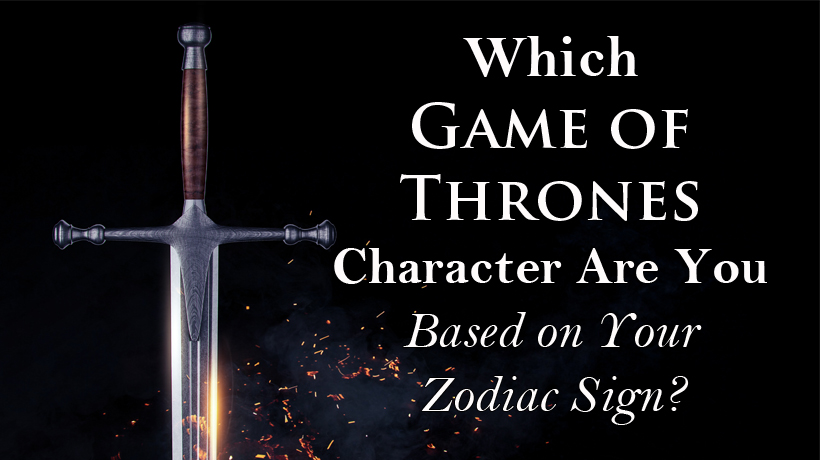 We may not know who will take the throne during the final season of Game of Thrones, but we do have an idea which zodiac signs match our favorite Westerosi characters. And if you don’t agree with us . . . well, you know nothing, Jon Snow.

Aries (March 21st-April 19th)
Khaleesi, Myhsa, the Dragon Queen – you’re a lady with many names, and that’s before we get to your official titles. Daenerys Stormborn of the House Targaryen is headstrong, passionate, and courageous. You might not necessarily be as interested in conquering like Dany, but you do love to travel and explore new cultures.

Taurus (April 20th-May 20th)
You’ve been on plenty of adventures, but what you’d really like is to be in your own bed with a belly full of wine. Both you and Tyrion Lannister appreciate a cozy home with a few prized possessions – nothing over-the-top, just enough to be comfortable.

Gemini (May 21st-June 20th)
Varys hid his true loyalties from Robert Baratheon after he was inspired by hearing about Daenerys. Some may call that duplicitous, but just like a Gemini, the Spider is simply studying the people around him, mastering the art of communication, and doing what’s best for the world.

Cancer (June 21st-July 22nd)
There is absolutely nothing in Westeros that Cersei Lannister loves more than her children. She would do anything to protect them, just like a Cancer (although you probably wouldn’t quite do everything Cersei does). Cersei can be as moody as a Cancer, but she never loses sight of her priorities.

Leo (July 23rd-August 22nd)
We usually associate the qualities of a Leo with the tried-and-true hero archetype, and Jon Snow fits that character perfectly. While he may be more of a reluctant hero than you might be, his integrity never wavers. Your talent and strong moral code help you survive when winter is coming.

Virgo (August 23rd-September 22nd)
A girl has a name, and her name is Arya Stark of Winterfell. Arya has evolved from the rambunctious, spontaneous nature of a child to the level-headed, calculating traits of a Virgo. She’s not heartless like Cersei, but she is completely focused on her mission.

Libra (September 23rd-October 22nd)
With a ruling planet of Venus, Libra is the astrological sign of grace, refinement, and aesthetics. Even when she was a bratty teenager, no one could deny Sansa Stark’s natural beauty and elegance. But don’t be fooled by a pretty face; Sansa has grown into a feisty, independent leader, seeking justice and retribution just like a Libra would.

Scorpio (October 23rd-November 21st)
Olenna Tyrell once called her granddaughter Margaery the most beloved queen in Westeros because Margaery won over everyone, from the noblemen to the lowest class. Because of this, Margaery embodies a Scorpio. Arguably the most cunning and intelligent player of the game, Margaery was a dominant player not because of ruthlessness but because of charm and magnetism.

Sagittarius (November 22nd-December 21st)
The things you do for love. As an idealist, Sagittarius relates most to Jamie Lannister. Sometimes he compromises his strong moral nature because he looks for the best in the people he loves. Even when he knows he should take a stand against Cersei or Tyrion, he chooses to look past their impulsive choices (for better or worse).

Capricorn (December 22nd-January 19th)
Daenerys banished him twice and yet he returned . . . twice. As a Capricorn surely understands, no matter how many times you knock Jorah Mormont down, he’ll stand back up again. You value hard work and determination above all else. As House Mormont would say, “Here We Stand.”

Aquarius (January 20th-February 18th)
Progressive Aquarius is years ahead in the way she thinks – though not quite as literally as Bran Stark. As the Three-Eyed Raven, Bran is logical, confident, and curious. Bran doesn’t need the power to see across time and space to be such an innovative thinker, and neither does Aquarius.

Pisces (February 19th-March 20th)
Disciplined training and routine aren’t really your thing; you’d rather daydream or get lost in a good book, making you just like Samwell Tarly. Plus, your natural empathy means you’re most likely to take an underdog like Gilly under your wing.