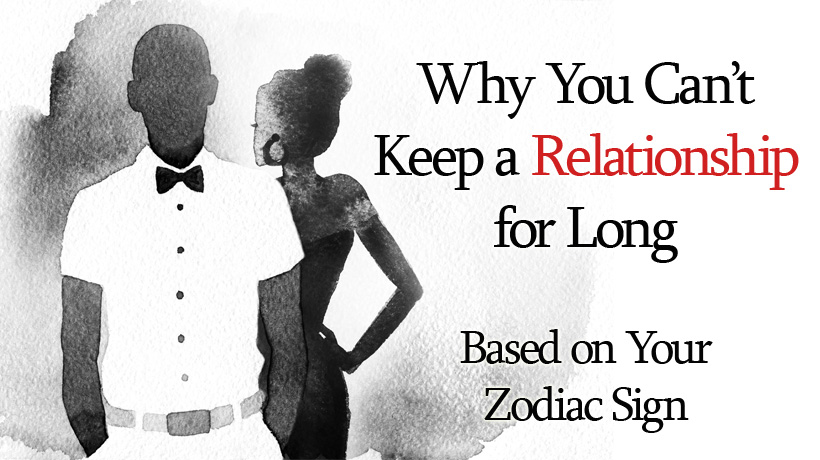 Ahh, love. They say it can make you do crazy things. But those of us who have never been in a long-term relationship may not have had the chance to experience the highs and lows of amore (sorry Dean Martin).

Aries (March 21st – April 19th)
Fire sign Aries is known for their impulsivity. However, sometimes they don’t know when to stop. This can lead to anything from financial issues to emotional issues within their relationship. While some may dig Aries’ ability to leap before looking, it can leave others running for the hills.

Taurus (April 20th – May 20th)
Taurus is represented by a bull, and rightfully so. This earth sign can be extremely stubborn – or bull-headed if you will. While some may admire Taurus’ unwavering discipline, their inability to see things from any perspective other than their own can leave their partner feeling frustrated.

Gemini (May 21st – June 20th)
Imagine trying to trap a gust of wind in a mason jar. That’s what it’s like trying to get a Gemini to commit to you. This sign loves to be flirty and free and has trouble being tied down. They may even go for people who they know aren’t right for them just so they don’t feel guilty when they disappear.

Cancer (June 21st – July 22nd)
Cancers can be very loving and devoted partners. They’re the type to spend all day feeding you soup and DayQuil while you’re sick. But if they feel their love isn’t being accurately reciprocated, they can get into one of their moods, even resorting to the silent treatment to get their partner to notice them. For those who would rather have open communication, this simply won’t do.

Leo (July 23rd – August 22nd)
It’s no secret that Leos love the spotlight (and themselves). This can often lead to Leo putting themselves before their partners. Like Sinatra, they’ll want to do everything their way – their movies, their date spots, their social events. And while they usually do have good ideas, Leo’s partner may not be able to deal with their selfishness.

Virgo (August 23rd – September 22nd)
Virgos can be very critical – on themselves and others. Their perfectionist tendencies may cause them to constantly nitpick at their partners or the relationship as a whole. This could drive a wedge between Virgo and their lover, who may not be able to handle the earth sign’s judgmental side.

Scorpio (October 23rd – November 21st)
Ambitious Scorpio likes to be the boss at work and in the bedroom. With a full sexual appetite, they may always be craving more. This applies to their relationships as well, where they may find themselves sexually fantasizing about those who aren’t their partner. If these fantasies leak into the real world, or Scorpio’s partner isn’t comfortable with them, their relationship could be in danger.

Sagittarius (November 22nd – December 21st)
Sagittarius values honesty and isn’t afraid to hold back, even with their partner. However, their delivery can be a little harsh–especially if they’re angry. In order to stay in a relationship, this fire sign may need to learn how to bite their tongue in order to spare their partner’s feelings.

Capricorn (December 22nd – January 19th)
For Capricorn, work is usually a first priority. Like Scorpio, they’re very ambitious and often have a hard time prying themselves away from their desks. While this is great for the financial stability of the relationship, it can alienate their partner.

Aquarius (January 20th – February 18th)
Like the other air signs, Aquarius can be flighty and inconsistent with their emotions. One second, they could be completely in love. The next, they’re emotionally distant and cold. After a while in a relationship, their feelings may dull, causing their partner to seek someone who can give them more emotion.

Pisces (February 19th – March 20th)
Pisces tend to avoid their problems at all costs. If they do have an issue with their partner, they’re unlikely to say anything. This can lead to festering resentment, ultimately manifesting itself in an explosion of Pisces’ emotions and destroying the relationship.