Do You Worry Too Much Based on Your Zodiac Sign? 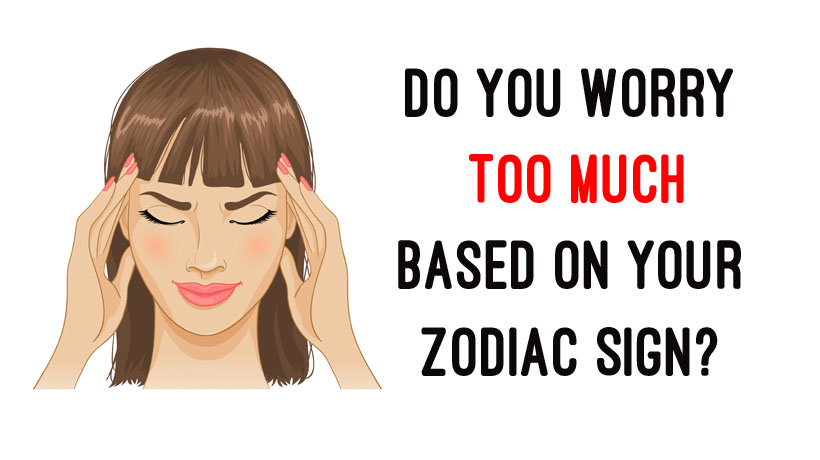 In life, there are certain things that are worth your energy, but there are plenty others that aren’t. Read below to confirm whether you tend to lay back or overthink (according to your zodiac sign).

Aquarius (January 20th-February 18th)
Since you’re such a deep thinker, you usually worry about things that are sometimes out of your control. However, you think it’s useless to simply sit around and stress out about these things – you prefer to take action.

Pisces (February 19th-March 20th)
Pisces women are generally very trusting people; they feel like they don’t have much of a reason to worry. They know what deserves their attention and what doesn’t.

Aries (March 21st-April 19th)
As an Aries, you’re very concerned with everything going your way –  that’s because you’re so fixated on success (which can lead to slight unease). However, you may get more frustrated than anxious when something doesn’t work out in your favor.

Taurus (April 20th-May 20th)
You’re incredibly patient and practical. You don’t usually get worked up when things don’t happen quickly. In fact, you prefer to take things slowly. You also understand that not everything is worth your time and energy.

Gemini (May 21st-June 20th)
Even though Gemini women are comfortable in social situations, they can sometimes have an air of nervous energy around them. You can go from being charming and chatty to being restless and quiet in a matter of minutes.

Cancer (June 21st-July 22nd)
Cancer women are fiercely protective of their loved ones; they’re constantly thinking about their wellbeing. They also tend to be suspicious of people, especially if they sense that they have bad intentions.

Leo (July 23rd-August 22nd)
As a Leo, you are completely comfortable with being the center of attention. You also rarely worry about what people think of you – you’re extremely proud of who you are.

Virgo (August 23rd-September 22nd)
Those of your sign tend to overanalyze a lot – and I mean a lot. You have an incessant need to make sure that every detail is perfect, which can make you feel anxious and worrisome.

Libra (September 23rd-October 22nd)
The only reason your sign worries is because you constantly strive for justice and compromise. You desperately want to help those in need – and you feel like you have to do so as soon as possible.

Scorpio (October 23rd-November 21st)
Since you aren’t too fond of opening up to everyone you meet, you have difficulty trusting them. You’re wary of betrayal – and it’s always in the back of your mind.

Sagittarius (November 22nd-December 21st)
You embrace change and can appreciate a challenge; you never feel anxious over these things. As an idealist, you always look on the bright side. Your carefree nature is something that other people desperately wish they could have.

Capricorn (December 22nd-January 19th)
Capricorn women are so hyperfocused on their goals that they don’t have much time left over to worry about little things. However, the one thing that does scare them is the idea of failure.