10 Hollywood Celebrities Who Speak Openly About Their Faith 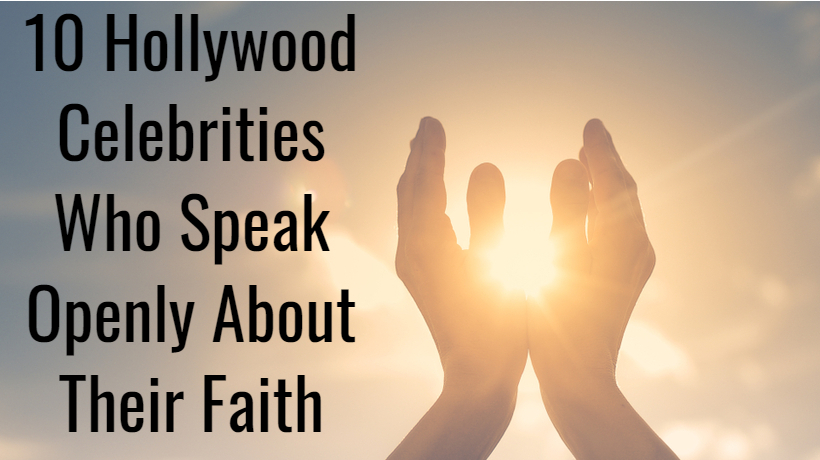 In the past few years, Hollywood’s biggest names have become incredibly open and vulnerable with the public on a number of topics, including mental health, physical health, love lives, and even faith. Many celebrities often attribute their success to their faith and reference their unapologetic faith in their journeys to stardom.

Here are 10 celebrities who have openly shared their faith and religion with the world:

Arguably one of the most well-known country artists of our time, American Idol winner Carrie Underwood has always been vocal about her relationship with God through her music and through countless interviews. In an interview with CBS Sunday Morning, Underwood opened up on the grief and anger she felt after experiencing a series of miscarriages.

“For the first time, I feel like I actually told God how I felt,” she said in the interview, “And I feel, like, we’re supposed to do that.” The singer now has two children.

Star of “Big Bang Theory” and the 1990 series “Blossom” has shared insights of her Jewish faith with readers of her blog, Grok nation. Bialik has gone on to say that she feels Hollywood does not feel like a welcoming place for people of faith, additionally claiming she studies Jewish texts frequently.

Bialik also personally feels that it is “really positive to me when you’re a person of faith, it stays with you all the time.”

Two-time Oscar winner Denzel Washington has also been quite open about his own personal encounters with multiple faiths in interviews. In a GQ interview, Washington revealed that his father was a Pentecostal preacher and that he attended church every Sunday, the same church he has been attending for 30 years. Washington has noted that he has read the Bible front to back and even compared it with texts from both the Koran and Torah.

The hit writer and comedian behind the shows The Office and The Mindy Project has always talked about her Hindu faith in comedic ways, even referring to her faith in some of her work. Despite never being a devout Hindu, Mindy incorporates her religious identity into her work and does not shy away from introducing the Eastern religion to her daughter’s life. After the birth of her daughter, Katherine, she decided to hold a Mundan ceremony for her, which is a common Hindu ceremony where the baby’s hair is shaved off between four and three months of birth. The ceremony is believed to rid the baby of any negativity from their past life while promoting mental and spiritual development.

Born Lew Alcindor, now known as Kareem Abdul-Jabbar adopted the Muslim name after the Bucks won the NBA championship in 1971. Abdul-Jabbar was introduced to the faith in his freshman year at UCLA, and he continued to travel to Libya and Saudia Arabia to study Arabic and the Quran. Now a renowned writer and activist, the basketball star wrote in an opinion piece for Al Jazeera America, “I emerged from this pilgrimage with my beliefs clarified and my faith renewed. From that year to this, I have never wavered or regretted my decision to convert to Islam.”

Once the highest paid man in entertainment, Perry has never been afraid to speak on the church’s effect on his life and success. Most of Perry’s films have involved religious topics, or Christian family oriented. He has often spoken about his ability to combine both his faith and passion for entertainment, once saying “If you don’t want my God here, you don’t want me here either. God has been too good to me to go and try to sell out to get some money.”

The Saturday Night Fever actor converted to the Church of Scientology in 1975 and has spoken about how the church has helped and supported him personally, including through the unfortunate death of his son, Jett in 2009. Travolta credits the church for their support in helping the family overcome the grief of their loss. Alongside Tom Cruise, who is an active member of the church of Scientology, Travolta has been candid and outspoken with his involvement in the church. Before his wife Kelly Preston passed away in the summer of 2020, he and his wife were one of the biggest celebrity couples to be heavily-involved in the controversial church.

One of the most renowned actors and filmmakers of our time, Tom Hanks, has always been a man of faith, and has been vocal on the effects its has had on his life and marriage. In his own words, Hanks revealed that he has been exposed to a variety of religions, including Catholicism at an early age, Mormonism, Judaism, but described himself as a “Bible-toting evangelical”. Before marrying his current partner Rita Wilson, Hanks converted to the Greek Orthodox Church.

Perhaps most well known for his role in Pretty Woman, Gere is also well known for his devout and forthright belief in Buddhism. Gere attributes his studies to the 14th Dalai Lama himself and has been studying the religion since his 20’s. His interview with Lion’s Roar “My Journey as a Buddhist” cites his interest in learning more about the religion: “I realized, this is work, this is work […] It’s serious work on your mind. That was an important part of the path for me.”

Baseball player and former quarterback Tim Tebow has opened up many times about his faith in interviews and on the field. His habit of kneeling in prayer on the football field has become a universally recognizable symbol of Tebow’s unbridled faith. Tebow’s novel, “Shaken: Discovering Your True Identity in the Midst of Life’s Storms” focuses on his faith and its importance to his career as a Christian athlete.

Any that you think we should add to our list? Let us know in the comments!