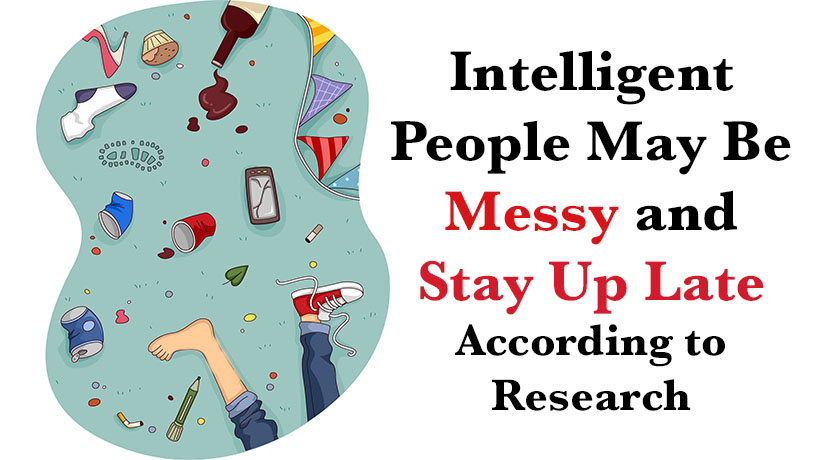 Have you heard of the phrase “the early bird catches the worm?” Well, it doesn’t apply here; studies have shown that intelligent people may actually be the ones sleeping in late and working in untidy settings. As important as it is to sleep in early and stay in an orderly setting when it comes to intelligence there may be some benefits of doing the opposite.

Intelligent people may be messy
It’s important to keep a clean desk; it keeps you well organized. But that doesn’t mean there aren’t any benefits to having a messy desk. There’s research shown by a psychological scientist named Kathleen Vohs and her research team at the University of Minnesota who noticed that a messy desk may stimulate creativity.

According to the Association for Psychological Science, in the study participants were asked to come up with new ideas for uses of ping pong balls. One group of participants were placed in a messy room while another group was placed in a clean room. The result of this experiment was both groups gave about the same amount of ideas, but the group that was placed in a messy room generated more creative ideas in comparison to the group who were placed in the clean room.

Intelligent people stay up late
Many people believe that night owls tend to be slow or lazy considering that they sleep most part of their day. However, some have statistically shown that night owls are doing well on the intelligence scale. Newsweek discussed a study done to show the difference between the night owls and the early birds in terms of intelligence.

According to the study in the Journal Science, depicted by Newsweek, early birds have what scientists call “a faster build-up of homeostatic sleep pressure,” in the morning in comparison to the night owls, who constantly keep going, resisting sleep. Early birds sleep at night regenerate, and are ready again in the morning. In the study led by Christina Schmidt and Philippe Peigneux of the University of Liege in Belgiumhad, they had a total of 31 participants. 15 were night owls while 16 were early birds. In this study they were tested in a sleep lab, where both groups were separated by about 4 hours in sleep patterns; if the early birds woke up at 8, night owls slept until 12. When early birds were ready to go to sleep early, night
owl would stay up through the night.

The researchers then studied each of their brain activity using an fMRI to see their attention. In the results it was in their morning test there wasn’t any difference between the night owls and early birds, but in the evening test night owls weren’t as sleepy and had a quicker reaction time than the early birds. Night owls were mentally alert at night because they can tolerate the pressure of sleep in comparison to early birds who were mentally tired and couldn’t focus when it came to night performance.