12 Great Ways to Clean a Home with Hydrogen Peroxide 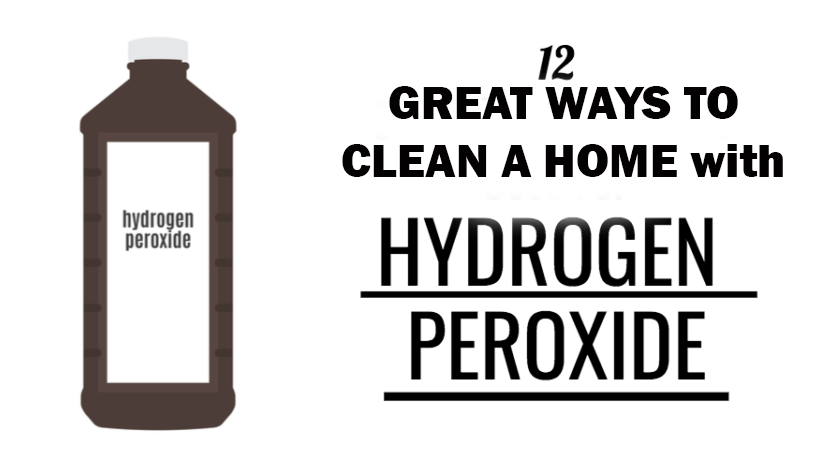 Your mom probably used to clean your cuts as a kid with hydrogen peroxide. It’s great for rinsing away dirt and dried blood. But did you know thats not all it’s good for? This affordable product is so versatile and can be used to clean and eliminate bacteria multiple ways. Here’s a few you may not know about:

Cleaning tile grout
Hydrogen peroxide mixed with sodium is known as oxygen bleach. Bobvila.com says that when we add water the compound releases an oxygen molecule to help it lift mold and stains from the surface of natural materials.

To create a strong homemade grout and tile cleaner, mix ½ cup of baking soda with ¼ cup of hydrogen peroxide in a sealable container. Add a teaspoon of liquid dish soap, close the lid, and shake until fully combined. Wearing protective gloves, apply to tile and grout, let sit for at least five minutes, then rinse clean with water.

Clean Up the Shower

If you’re no stranger to pesky mold and mildew in your shower, then try this! Just pour peroxide in an empty spray bottle, spritz away, and wipe down. It’s known to have great anti-fungal properties.

RealSimple.com states that if you add a quarter of a cup of peroxide to a sink full of cold water then rinse, it will get rid of any bacteria and pesticides!

Clean Out the Refrigerator

Try using some (non-toxic) hydrogen peroxide on a paper towel, rag, or sponge and use that to clean the shelves, walls, etc. to get rid of any lingering bacteria.

Style and beauty influencer Sharon Clear uses hydrogen peroxide to clean her makeup brushes. The magic formula: one part water, one part hydrogen peroxide, and let them soak for five to seven minutes. Then air-dry the brushes overnight and voila!

Using hydrogen peroxide to clean any kind of beauty tool prevents bacteria from spreading to your skin, which can help curb acne…leading us to our next point.

Cleaning up your face with hydrogen peroxide is a thing too! If you are having a break-out or just one stubborn pimple, putting some peroxide on a cotton ball can kill the bacteria in the pimple or cause it to dry up. Either way, you are getting rid of the acne sooner with this trick! If you are unsure about this method working for you please contact your dermatologist.

Not Only Can It Clean Your Laundry…But The Washing Machine Too!

Hydrogen peroxide makes a great substitute for bleach, but just make sure to either test the fabrics first or only use it on whites because it can stain dark fabrics. Fun fact: Hydrogen peroxide is also a more environmentally friendly product than bleach!

After you clean your clothes, don’t forget about the machine. Washing machines can develop musty odors. This comes from mildew and mold that grows from excess fabric softener and detergent residue left in the machines. Add two cups of hydrogen peroxide to the empty washing machine drum. Then, run a hot water cycle. Try to do this at least once a month.

According to Bobvila.com the extra oxygen atom in H₂O₂ benefits the growth process and can also treat a number of conditions, including pests, root rot, and fungus. Be sure to test a small amount of the solutions on leaves or soil first because TOO much can damage the plant. Mix one tablespoon of three percent hydrogen peroxide and one cup of water in a spray bottle and soak the soil with the solution once or twice a week (making soil dries out completely before a second treatment).

Make a bowl with equal parts cream of tartar (a mild powdery acid used in baking and available at grocery stores) and baking soda. Add a few drops of hydrogen peroxide, just enough to form a paste. Rub paste onto rusty objects, wait an hour, then wash with water. (Works best for light to moderately rusted items like tools and toys. It’s also useful for orange stains in your sink or tub.)

That’s right no harsh chemicals or power washing. Just pour a gallon of warm water into a large sprayer. Add ¼ cup three percent hydrogen peroxide, a few drops of dish soap, and a scoop of borax (a sodium-based mineral powder). Spray metal chairs and tables with the solution and let it work for 10 to 15 minutes. Wipe down with a sponge to see the difference!

In a small bowl, place half a cup of baking soda and mix in a few drops of three percent hydrogen peroxide to form a paste. Spread over the stained area, let sit for five to 10 minutes, and wipe clean with a damp cloth.

Hydrogen peroxide can be used to clean so many things but it’s best to only mix it with water. Combining the solution with ammonia, chlorine bleach, or vinegar in a closed container can cause unsafe gasses to form.