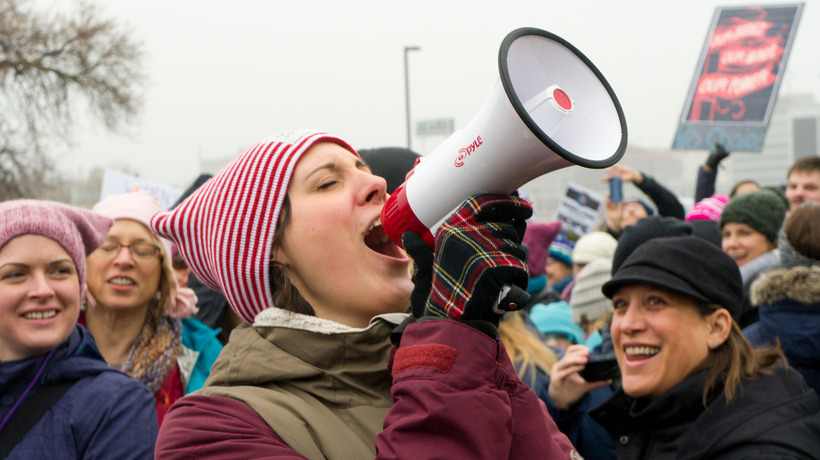 This past Saturday, thousands of protestors gathered in cities across the country for the fifth annual Women’s March, focusing on protecting reproductive rights.

According to Al Jazeera, 660 demonstrations took place around the country over the weekend, including a rally at the nation’s capital that was attended by around 5000 people in and around the Freedom Plaza. The marches were largely sparked after Texas legislators passed the most restrictive abortion measure in the country last month, essentially banning abortions after six weeks

Experts say that 85% to 90% of all abortions are carried out after six weeks. Additionally, most women are unaware they are even pregnant before 6 weeks.

“No matter where you are, this fight is at your doorstep right now,” she continued. “This moment is dark, but that is why we are here.”

At the marches across the nation, protestors carried signs that read, “Mind your own uterus,” and “Abortion is a personal choice, not a legal debate,” and donned t-shirts that read “1973,” a nod to the landmark Roe v. Wade supreme court decision protecting a person’s right to an abortion.

At a demonstration in Austin, some abortion advocates told KUT reporter Ashley Lopez that they would consider moving out of the state over the restrictive abortion ban.

“If this law doesn’t go away, I don’t want to get rid of my rights,” Ashlie Harrison said. “So, I do think about maybe moving out if it doesn’t get changed.”

The marches occurred right before the supreme court is scheduled to reconvene for its next session this week. Among the cases the high court is set to review this session includes one that could challenge the current standing of Roe v. Wade.

“I don’t think that old men, politicians should be making the decision on what I can and can’t do with my body,” Alejandra Marquez, a protester in Austin, told Al Jazeera. “I think every woman should have the right to decide when they want to have kids, and how, and how many.”