Reba talks life changes post-divorce: "I had to run it all through God" 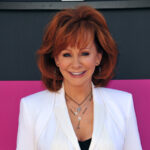 Country music star Reba McEntire is opening up about how she took charge of her career after her divorce.

During an appearance she made on the Apple Fitness+ Time to Walk experience, the 66 year-old singer shared a story about how she regained control over her business and career after separating from ex-husband Narvel Blackstock in 2015. The couple was married for 26 years.

“We got a divorce, and the shocker of it all was, there were four people who were taking care of all my business,” McEntire explained. “I had my production manager who left, I had my CEO who left, my manager and husband, and my father had died. So four men who were rock and pillars of my world were gone.”

“I started taking over signing the checks and then I started realizing how much water cost, and the electric bill, and all the things that was going on in my life,” she continued. “I made the money, I brought it home. So it was a huge, huge change for me.”

When reflecting on adjusting to life after divorce, she explained that she ran it “all through God.”

“I had to say, ‘OK big boy, I can’t handle this. This is way over my pay grade — I don’t know what to do,'” she said. “And I would wait, and He would guide me. And so without my faith, I have no idea where I would be or my career would be, at this time today.”

In 2020, McEntire announced that she was dating actor Rex Linn, who is known for his work in “CSI: Miami,” “Better Call Saul” and “Young Sheldon.” The two got together in January of that year, and have stuck together throughout the pandemic, keeping in touch through Facetime and texting.

“It’s just great getting to talk to somebody who I find very interesting, very funny, very smart and is interested in me, too,” she said on her podcast.