3 Things Narcissists Do to Exploit People 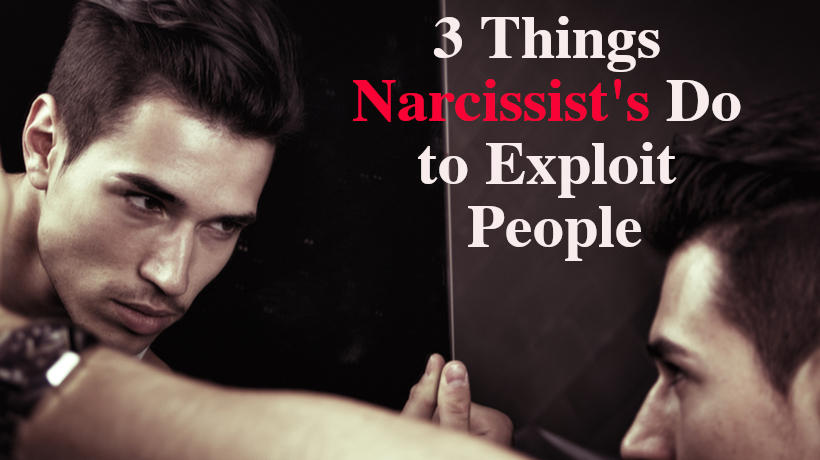 If your partner is inconsiderate or your office mate is overly critical, they could just be your average jerk, or they could be a narcissist. Narcissists, according to the Mayo Clinic, are people who have an inflated sense of their own importance which masks a fragile self-esteem that’s vulnerable to the slightest criticism. They exploit other people to boost their self-esteem. These are the strategies they use:

According to Michael Padraig Acton, a counseling psychologist, “The narcissist’s attack follows a predictable pattern which can be split into three stages: idealization (or over-evaluation), devaluation and rejection.” In the first stage, idealization, the narcissist “lovebombs” their partner, charming them into thinking the narcissist actually cares. Christine Hammond, MS, LMHC, a Licensed Mental Health Counselor, says, “They use their charm to entice a person to share confidential details, especially ones that caused the other person embarrassment.” But the truth is, narcissists completely lack empathy, according to Melinda Smith, who has a Masters in psychology. “Narcissists never develop the ability to identify with the feelings of others,” which means they’re not in love with the person, but with having someone to boost their egos. Psychotherapist Steven Berglas Ph.D. says the narcissist wants victims “to feel “special” so if he needs you, you’ll respond like Pavlov’s dogs.”

Once the narcissist has “won” someone’s love and affection, they feel entitled to those feelings, according to Sherry Gaba LCSW, a licensed psychotherapist. Hammond says that narcissists will use any dirt on their partner to “keep the other person in check and constantly worried about when the information will come out.” This gives the narcissist control and makes sure the other can’t leave them. “Gaslighting is another favored technique of the narcissist, whereby they will plant insecurities in their partner’s mind using lies and deception,” says Acton. Making you feel dependent on them makes the narcissist feel powerful and important. According to Smith, “If there is ever an interruption or diminishment in the admirer’s attention and praise, the narcissist treats it as a betrayal.”

“The narcissist will often find a new object of affection at this stage or will simply disappear from the scene, giving every indication of being indifferent to their former partner’s existence. But in reality, even this is a deception. The narcissist is painfully aware that their victim still exists and can only accept it if they are completely powerless and left with nothing,” says Acton. Narcissists want to feel that their victims are entirely dependent on them, so they leave, hoping the other will beg them to come back. But, says Gaba, “The narcissist has already moved on to his or her next conquest.” By trying to win them back, the victim gives the narcissist the attention they crave without getting anything in return.