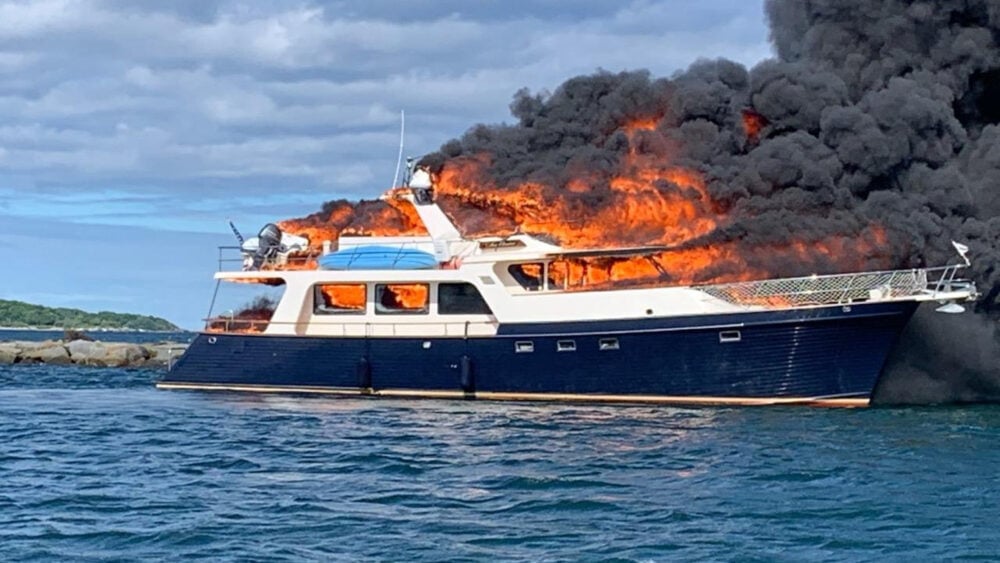 Three people and two dogs are safe after the 70-foot yacht they were aboard caught fire while out on New Hampshire’s Piscataqua River, PEOPLE reports.

The group “jumped overboard as the boat became engulfed in flames” just after 4 p.m. on Saturday, state police revealed that night. The passengers have been named as Arthur Watson, 67, Diane Watson, 57, and Jarrod Tubbs, 33.

On Facebook, N.H. State Police released an image of the boat, a 2007 Marlow named Elusive, being swallowed in flames and thick clouds of smoke.

“According to passengers, within minutes the boat completely filled with smoke,” the department said, adding that the people “were rescued by nearby boats and taken to shore. All three were transported to Portsmouth Hospital, where they were treated and released.”

“The boat fire occurred on Little Harbor,” they wrote. “The dogs are safe and doing well.”

According to the U.S. Coast Guard via a tweet, USCG Station Portsmouth Harbor, NH Marine Patrol and Portsmouth NHFD responded to the incident, and that “both reported people onboard the vessel were assisted by a good samaritan and are uninjured.”

“The vessel drifted out of the harbor with the outgoing tide across the state line into Maine,” officials added. “Efforts by several agencies to save the boat were unsuccessful. Within two hours of the initial call, the boat sank in waters off Kittery, ME.”

State Police Marine Patrol Sergeant Stephen O’Connor told local station WMUR-TV that they’re “very lucky the tide was going out,” because “if the tide was coming in there’s a good chance the boat would have drifted into Wentworth Marina and that would have been a disaster.”

He added: “This boat was their home. They lived on this boat, so everything they owned was gone.”

Fortunately, they made it out with each other —  and with their four-legged friends.

“The two dogs are just fine,” O’Connor said. “Someone at the marina took the dogs, took care of them, and actually took the dogs to the hospital. When they were discharged the dogs were out there waiting for them. They’re all reunited, and everybody is just fine.”

The cause of the fire is unknown, but N.H. State Police urge anyone with information related to the incident to contact O’Connor at Stephen.J.O’Connor@dos.nh.gov or (603) 227-2117.