3 Reasons Women Are NOT Too Emotional 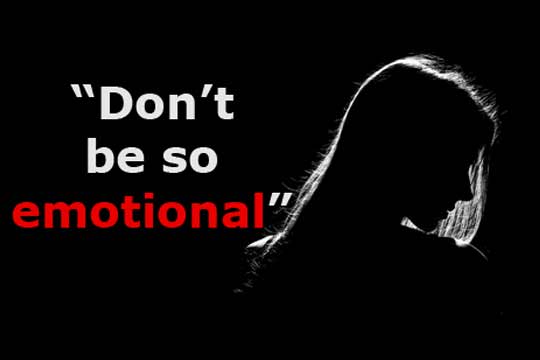 I can’t tell you how many times my female clients have told me they don’t feel comfortable showing their true emotions in the workplace. They don’t want to be perceived as being unprofessional or accused of being manipulative, weak, or intellectually inferior. Being emotional at work can be uncomfortable for many people. So, we hide our emotions hoping that will make us appear stronger, smarter, and more “professional.”

You would think we’ve evolved beyond that, but we haven’t, not by a long shot. Too often women are accused of being “too emotional”—especially at work. But is that true? I’m going to address what is often thought and said about this topic and set the record straight:

You’re a bitch if you get angry
The truth: A man can say the same thing a woman says, in the same tone and with the same body language that a woman says it, and he’ll be admired while the woman will be labeled a bitch. Leadership consultant Doug Sundheim, in the August 15, 2015 Harvard Business Review online article wrote, “…there’s a gender bias around showing emotion at work. I’ve seen that in the same places where men get labeled tough, passionate, or open, women get labeled bitchy, hysterical, or weak.”

You shouldn’t cry at work—that’s just manipulative
The truth: The best way for me to convey the truth about this point is to share a story. I talked to a female colleague last week who is an executive coach. She had a meeting with a male senior manager she was coaching. His lack of emotional intelligence was preventing him from leading his team well. My colleague really believed in him, and after she shared what she thought his strengths were, she began to talk to him about his weaknesses in his communication and relationships—she knew he could be a great leader and she wanted to help him become that. As she was telling him what no one else dared to, her eyes welled up and the tears fell.

To her surprise and relief, the senior manager who had such a tough exterior, had his own tears. He told her, “I knew you were really smart and that you cared; I just didn’t know how much. For the first time ever, I think I can actually change the things I need to change.” The truth is you’re not too emotional if you cry at work when it fits the occasion—you’re demonstrating your humanity.

Both men and women have feelings and we all can be hurt or offended at times by what others say or do. The fact that (in general) men might hide their emotions more often or outright deny them doesn’t make them more professional. The truth is, you’re not too emotional if you’re bothered by someone’s remarks or actions—you’re just like the rest of us, whether we’d admit it or not.