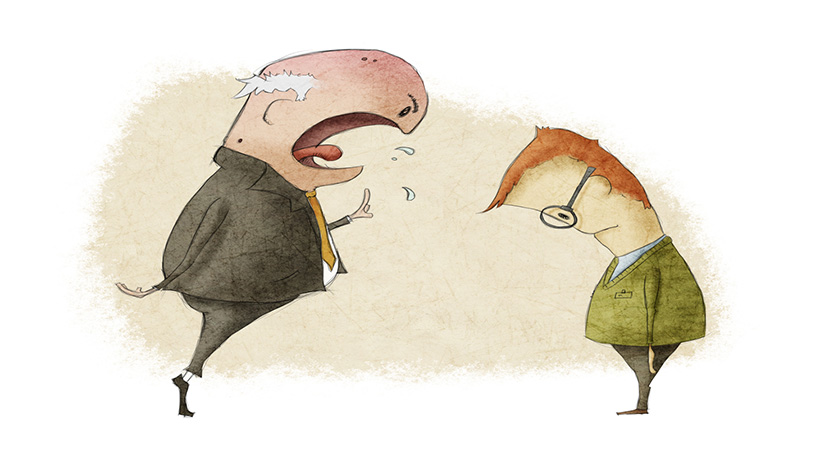 “If you hadn’t done that, I wouldn’t be mad,” Wayne snarled.

What had she done? Chatted with other women at the party?

“I only yell because you don’t listen,” Hale insisted.

If I don’t agree, thought Samantha, does it mean I didn’t listen?

“If you’d backed me up, I could have handled that client.”

You expect me to back you when you’re rude?

Bullies, at home or in the workplace, excel at projecting their flaws on others. Have bullies convinced you that any problems in your personal or work relationship are your own fault? Try these four strategies for handling any bully who makes you feel what’s happening is your fault.

Calm your instinctive reaction so you can think straight
When a bully attacks, your body and mind react. Adrenaline surges into your bloodstream, preparing you to “fight or flight.” Your breathing becomes rapid and shallow. Blood flows into your arms and legs, preparing you to run or battle. This acceleration of breathing and exodus of blood from your mind leaves you unable to think clearly.

Don’t let a bully’s slams foot-sweep you into rash statements or actions. Take a few deep breaths. Breathing processes your adrenaline and triggers a relaxation response.

Blood flow increases to your brain and you think more clearly. Controlling your breathing also helps you to use your adrenal response. Instead of being ruled by it and thrown into choosing between “fight” or “flight,” adrenaline plus breathing links your brain’s left and right hemispheres, adding creativity to your thinking and sharpening your wits.

Remember what’s real
If you’re a good person and a bully says, “You’re not treating me well,” it can lead you to question yourself. A bully can twist you into emotional and mental knots, chipping away at your confidence. Once they cause you to look anxiously at yourself, they draw your attention to your most negative qualities, lowering your self-esteem, and making you more susceptible to their control. Don’t let a bully’s criticism take you apart piece by piece.

Stand up to the bully, before this blame/shame game depletes your self-worth and you can’t think straight any more. Declare what you see as reality.

Don’t let the bully set the rules for the game
An ancient fable poses this challenge. You show up at your teacher’s house for a class and the teacher invites you in for a cup of tea. Just as you start to pick up the cup, the teacher pulls out a large stick and says, “Here’s your challenge and you have to decide what to do right away and before I teach you. If you pick up the cup, I will hit you with this stick. If you don’t pick up the cup, I’ll hit you.” What should you do?

Some reach for the tea, fearing the coming blow but knowing they’ll at least have some tea to drink. Some sit in frozen indecision, or leave, and give up their chance to take the class. Bully blamers, like the teacher, often present you with a no-win situation in which it’s “heads you lose, tails you lose.” Your best option is to say, “I don’t like either choice.”

Deny the bully the rewards s/he seeks
Some bullies pounce on their targets in front of an audience, knowing the pressure that watching eyes and listening ears can have.

If a bully takes you on in front of an audience, deny the bully victory. Just as a wounded swimmer attracts sharks, if you wilt with embarrassment, the bully escalates. Put your game face on.

If you’re unsure about what to say, take a deep breath and exit the situation with dignity. Even if you can’t speak, you can still walk away. If you leave under your own power, consider your retreat an “advance in new direction.”

Have bullies in your work or home life projected their behavior onto you, accusing you of flaws they refuse to admit in themselves? Steady your so you can handle their attacks; declare your truth; refuse to play by their rules and don’t reward them.