4 Signs of Emotional Immaturity to Watch Out For 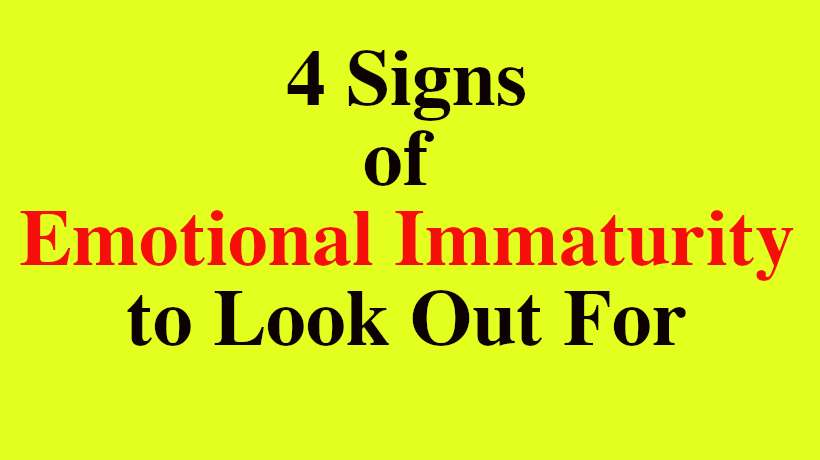 One of the perks of dating as we get older is that everyone’s more mature, right? Wrong. Not everyone who grows older actually grows up. Your partner (or maybe even you) might have a little bit more emotional growing to do to catch up with your age. Here are signs to look out for with emotional immaturity:

Being an adult means paying bills and taxes and taking care of yourself and those who depend on you. But emotionally immature people aren’t as responsible as they should be. “Emotionally mature people give up short-term payoffs (immediate gratification, escape, avoidance, self-indulgence, revenge, etc.) for something that is bigger or more fulfilling in the long-run,” says Dr. Roger K. Allen.

They have clear, long-term visions, which allows them to make consistent, disciplined choices. Someone who is emotionally immature will be much more impulsive, says clinical psychologist Susan Heitler, Ph.D. “They speak recklessly or take impulsive action without pausing to think about the potential consequences.”

Sometimes things don’t go as planned and life sucks, but emotionally mature people can handle this. “They are committed to knowing, hearing and working within the truth no matter how hurtful or stressful that truth may be,” says licensed psychologist Dr. Sherrie Campbell. Immature people will try to escape realities they don’t like. “An emotionally immature partner becomes extremely defensive over even the smallest of things, especially if they are in the wrong,” April Davis, Relationship Expert and CEO of LUMA Luxury Matchmaking, says.

Emotionally mature people tend to be happier than the immature. And they want to share their happiness, Dr. Campbell says, “They offer helpful services to others as a way to spread their own wealth and joy in ways that circle back.” And they are compassionate with themselves and others, says Megan Bruneau, M.A., a psychotherapist. They are also aware of their personal privilege and biases, so they can interact with others more mindfully and respectfully.

One of the scariest things you can do is be vulnerable and put yourself out there. It can be painful and super uncomfortable. But it’s also how you grow, which is why emotionally mature people do it, says Bruneau. “So if you’ve felt uncomfortable feelings lately, and acknowledged them, you’re growing in the right direction.” And if part of your vulnerability is reaching out for help, that isn’t a sign of weakness, but of courage and resourcefulness.

It allows you to become intimate with your partner. “Intimacy involves opening yourself up, sharing, connecting and brings about a sense of closeness, affection, and familiarity,” says Samantha Burns, LMHC, a Relationship Counselor and Dating Coach, which is something that emotionally immature people just can’t do.

How to Become Emotionally Mature

11 Signs Your Partner Is Emotionally Immature

Can You Spot 10 Signs of a Childish Adult?