4 Ways Sense of Smell Can Signal That Health Is Danger 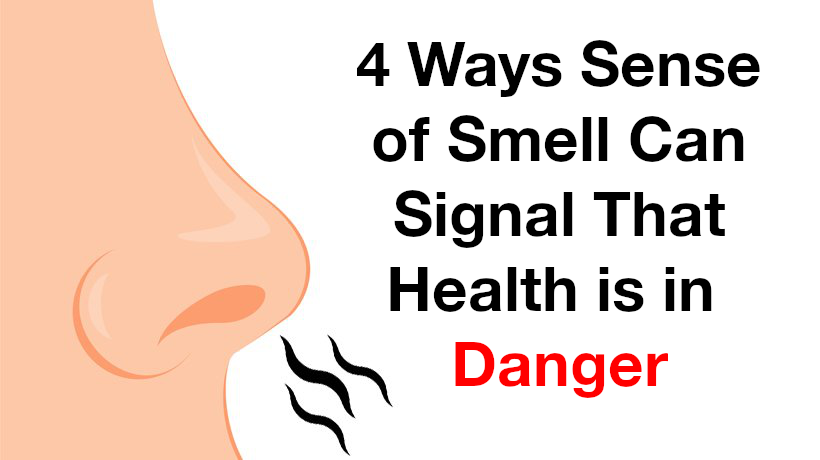 Your sense of smell is an important survival tool that can alert you to threats such as rotten food, gas leaks, and other hazards that might otherwise be undetectable. Impairments in this sense not only distort your appetite and food preferences but can also potentially compromise your body’s ability to take necessary action when threatened.  Because your nose is so important, here are four issues with your sense of smell that can signal that your health is in danger.

This disorder is often caused by traumatic brain injuries because they can inflict damage on the olfactory bulb, which is a structure in the brain that gives it information about perceived scents.

A bacterial or viral infection can also cause parosmia because upper respiratory infections can inflict damage on olfactory neurons.

Progressive brain disorders such as Alzheimer’s and Parkinson’s disease are marked by the formation of beta-amyloid plaques in the olfactory and central nervous systems and can lead to a distorted sense of smell as well.

You smell things that aren’t there
Phantosmia (a perception of odors that are not present; also known as olfactory hallucination) can be induced by all of the aforementioned causes, in addition to:

A deviated nasal septum can also be an underlying cause of hyposmia because its position in the nose could be obstructing satisfactory air passage.

You can’t smell at all
Anosmia (an inability to smell) can be induced by a number of the aforementioned causes, in addition to:

Diagnosis
Your doctor will likely inspect your nose with a special instrument to check for the growth of polyps. More extensive testing might be done by an ear nose and throat (ENT) specialist, who will likely perform a computerized tomography (CT) scan to get a more accurate picture of the area.

The CDC has stated that 2-14 days after exposure to the virus a new loss of smell or taste can indicate the presence of the virus. For other symptoms visit the CDC website here.

Many of these disorders, particularly those that are likely to be cause be issues with other organs, can be screened for with blood tests.