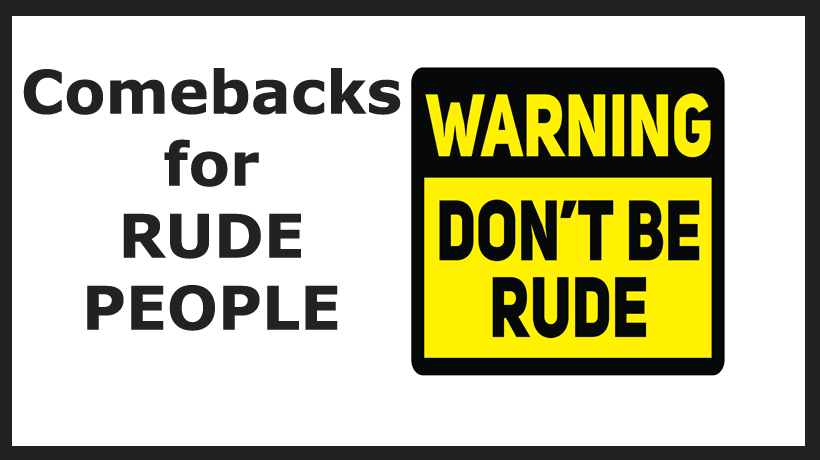 When you are angry or frustrated at other people’s rude behavior it can make you get a heated feeling. Stay calm so you can think through your response.  Try Cooling Breath. This is a reverse breath where you breathe through your mouth as if you are sipping through a straw.  Then breathe out normally through your nose.  Doing that for even 5 seconds before you respond can help you ACT, not React in a way you might not want to.

Then try one of the strategies below to have an artful comeback to rude people!

This response mixes just the right recipe of humor and snarkiness.  It gives the person feedback that their behavior crossed social norms and had an impact on you.  This is a backhanded quip which levels the power from you being the ‘victim’ (person who was acted upon) to the ‘victor’ (the person who has a voice and determines how the interaction will proceed).   It takes back the control from them and gives it to you, its empowering.  It helps you feel you are ‘sticking up for yourself’ by being transparent.

This is a response filled with compassion.  You assume the person’s behavior is an outgrowth of their own unhappiness or stress and has nothing to do with you.  Often people behave rudely because they are operating out of their own pressures. When they are late for a plane, have a pressing family situation they are worried about, or feel disempowered from being dumped on at our job, they enter into tunnel vision where their stressful thoughts play on loop.  They are less likely to consider our personal space and are more likely to snap at others. Responding with this level of empathy is a ‘pattern break’ for many people who go through their days feeling unsupported and that the world is against them. Most people don’t purposefully want to be rude, so your response allows them to realize the error of their ways.

3. “That was rude!”
This is a straightforward response that gives expression to your frustration about the other person’s behavior. You might feel like saying this if you don’t want other people to ‘get away with it’.   This comeback is a ‘full sentence” in and of itself – it doesn’t encourage further escalation or continued involvement with the other person.  Its meant for you to do a rapid but socially appropriate vent of your emotions so you can move on with your day.  It speaks to the person’s behavior rather than that they are a rude person, so it gives feedback to the other person without being accusatory of their personality which could inflame the interaction.

4.  “You may not be aware,  but that was rude…”
In this comeback, you are aiming to make their rude behavior into a ‘teachable moment’.  This response requires patience and a neutral tone so it creates the environment for reflection on the other person’s part.   “You may not be aware of it but when you said that…”   Or if a man says something sexist about your place in the workplace you could say:  Do you have a daughter or a wife?  How do you think they would take it if you said that to them?

5.  Turn their rudeness into a compliment or a collaboration.

For a rude behavior that is particularly sexist, you might want to tailor your response to the specific brand of sexism. If a man says something rude about your performance in the workplace it probably means he feels threatened by you.  You can put him at ease by saying “Jim I’m always going to use the best of my abilities to help our team get results, so my strengths will help us win.”  In this way, you leave them better than you found them!