5 Comebacks to Shut Down Rude People 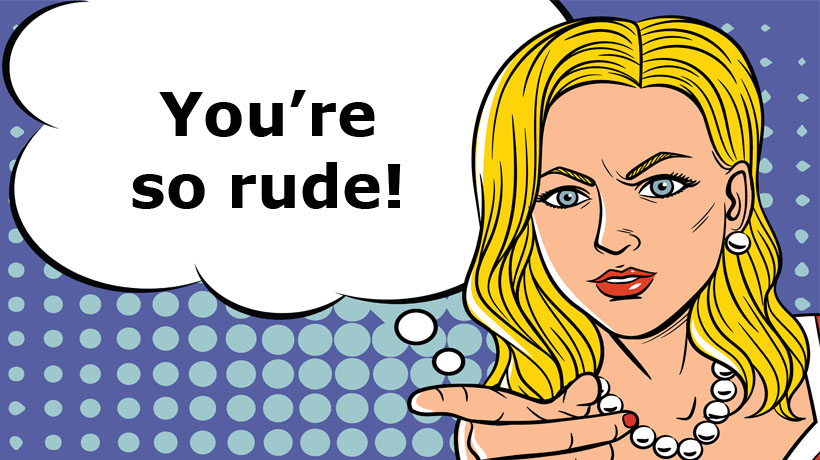 It can be difficult to find something to say those who are rude to you, whether it be at home, outside, or in the workplace. The key is not to take what people say personally; sometimes you never know why a person is actually being rude to you. However, what you want to remember is not to stoop as low as those who are being rude to you and handle it in a mature manner. What can we do to shut down rude people?

Say thank you
A person can be rude by putting in their input where it doesn’t belong and giving you a view that you didn’t ask for. The way to tackle their commentary is shown by how you respond, which can reflect your maturity over theirs. So just say, “thank you.” The reason why this comeback is so effective is because it’s showing that you are someone who is thoughtful and can take what they said in consideration even though it was rude commentary. This will immediately keep the other person shut.

Take a deep breath
Take the high road. If you feel yourself getting angry, you don’t want to give the person the benefit of showing your anger. Showing your anger can boost another person’s ego and let them think that it’s okay to be rude to you. You keep it cool and walk away.

Ask if it was necessary
But of course, you don’t have to always keep quiet. Following the method of staying cool, you can always ask if their commentary was necessary. It shows maturity and sensibility in person that can put the person being rude in their place and they might even apologize. It shows that you won’t tolerate rude comments and it will most likely never happen again.

You’re right
This can be really difficult to say and isn’t as satisfying to say. However, when you tell the person who is rude their right, it will cut the conversation short and maybe even surprise the person. It’s a comeback they can’t reply to. They won’t get the anger out of you like they may have wanted, which inhibits their enjoyment on wanting to see you angry.

Let it go
As mentioned before, don’t take the rude commentary personally. We don’t know the reason why a person is being rude and can do our best of letting it go by laughing or shrugging it off. By you laughing maybe you can put the person being rude in a better mood.