5 Signs of a Toxic "Friend" 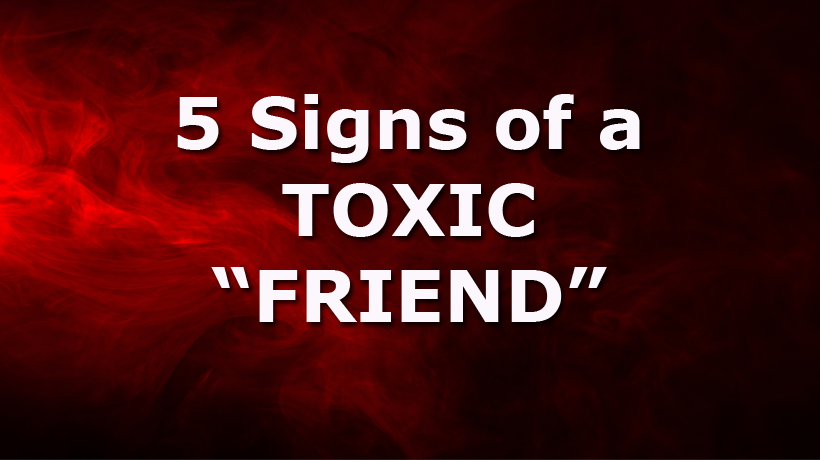 Friends are there for us through the best and the worst of times. Maybe you have a large group of friends, or maybe you just have a small group of companions. Either way, sometimes there are red flags that could mean your friend doesn’t respect you as much as you respect them. Here are five signs that a friendship may be toxic and it might be time to move on:

You’re dying to tell your friend about a recent job promotion or a great accomplishment and you’re met with nothing but doubt and negativity. This could be jealousy, or even just a lack of interest in your accomplishments. A real friend celebrates your achievements with you.

It is normal for people to be insecure sometimes, but when someone is overly insecure you should be careful. This is because insecurity can very easily become jealousy which can lead to resentment. For example, If a so-called friend doesn’t want you hanging out with others, and always seems to invite themselves along, there may be a trust issue surfacing.

If you’re headed to a concert or a restaurant for a great meal–-this friend is on board. But when you need someone after a rough week to talk to and they just aren’t available…something is wrong.

It’s all about them (and never about you.)

You know every single problem they’re dealing with at the moment, with their family, their relationship, or their career, but when it comes to you, they never even ask. Friendship is a two-way street.

Are you constantly fighting with your friend, or are you getting dragged into their conflicts that have nothing to do with you? If you feel like you’re getting into situations that make you uncomfortable because of them it might be time to walk away. Remove the drama and you remove that stress.

If you have a friend that displays any of these behaviors, it doesn’t necessarily mean they’re a bad friend. But it does mean it’s time for a conversation. If you still can’t see eye to eye, it may be time to distance yourself. Sometimes it’s better to end a friendship than to put your mental health at risk.

Disclaimer: The insights of this article are the opinion of the author.