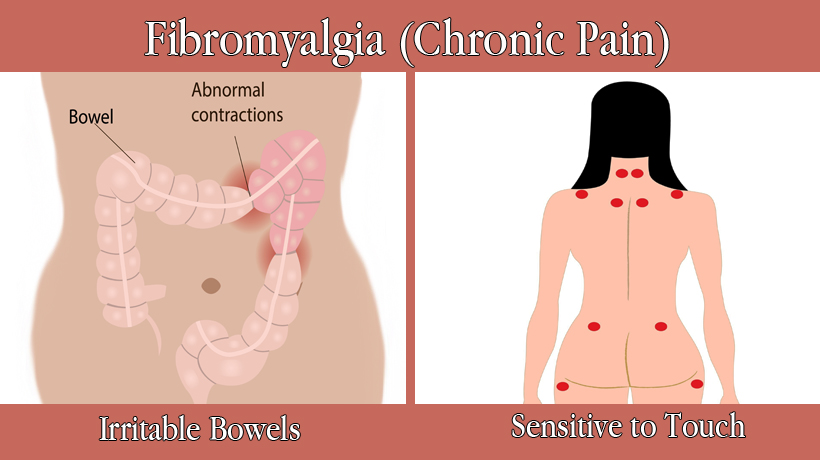 Characterized by chronic, widespread pain all over the body—fibromyalgia (or fibromyalgia syndrome) is a disorder accompanied by fatigue, mood and/or memory problems. Though doctors are unclear about what exactly causes fibromyalgia, researchers believe that the condition amplifies painful sensations by affecting the way your brain processes pain signals. According to the Office on Women’s Health, as many as 4 million Americans, ages 18 and older, are affected and it is generally more common in women than men. Though the average age range diagnosed is 35 to 45 years old, most patients experience symptoms that start much earlier in life.

The hallmark symptom of fibromyalgia is deep muscle pain or weakness throughout the body. Others symptoms include:

Extreme tiredness that does not get better with rest
There’s fatigue and then there’s fibromyalgia fatigue. Those who suffer from fibromyalgia often awaken tired (especially in the mornings), even after long periods of sleep. They may also experience trouble sleeping, often interrupted sleep patterns or have other sleep disorders such as restless legs syndrome and sleep apnea.

“Fibro fog”
Also known as fibromyalgia fog and brain fog, this symptom is commonly used to describe the cognitive difficulties that arise from the disorder. Over half of the people affected by fibromyalgia report an inability to focus their attention, often get distracted, forget or lose things and struggle to keep up with conversations. Many feel that this symptom impacts their lives more than the pain or fatigue they experience.

Anxiety, depression or mood problems
Due to the constant pain fibromyalgia patients experience and the effects that the disorder has on the central nervous system, depression is common. It is important to ensure proper sleep regulation in order to alleviate problems associated with irregular moods. A health professional can suggest ways to treat sleep problems.

Sensory overload
According to fibromyalgia researcher Benjamin Natelson, MD, a neurology professor at the Albert Einstein College of Medicine in New York City, the “uncomfortable and painful sensations of fibromyalgia may be part of your brain’s unusual way of processing pain.” Those who have fibromyalgia report heightened levels of sensitivity to touch or pressure, loud sounds, unpleasant smells, temperature changes or certain flavors.

Irritable bowel syndrome (IBS)
Irritable bowel syndrome is a common gastrointestinal disorder characterized by digestive discomfort. As many as 60 percent of people with IBS also have fibromyalgia, and up to 70 percent of people with fibromyalgia also have IBS. “IBS and fibromyalgia have a shared mechanism in that both are associated with hypersensitivity of the brain cells to stimuli, be it touch, light, or temperature changes,” explains Dr. Dennis Ang, associate professor of rheumatology and immunology at Wake Forest Baptist Medical Center in North Carolina.