5 Signs You're Dealing With a Psychopath (It's Not Just You) 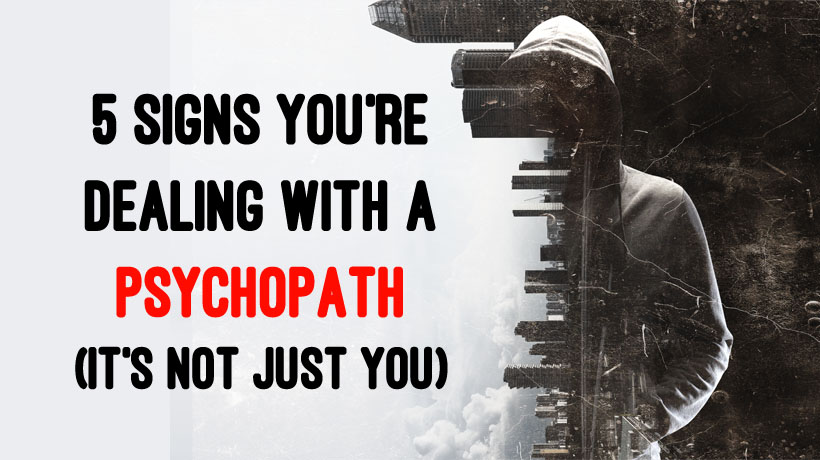 Psychopaths are purposefully scheming, callous, calculated and ruthless. If you find yourself in an argument with one, it’s best to remove yourself from interacting with them. Just move on. Since you’ll never win, it’s better than banging your head against a wall.

Here are some telltale signs to watch out for:

A twisted view of reality
Psychopaths live in a world that is based on their ideals and aims. They look for information that supports their views, and then use these views to support their arguments. They’ll spin tales to deceive and distract.
Typical response from them: “You don’t have a clue, do you?”

Lacks empathy and has rapid emotional mood shifts
They’re insensitive to others’ feelings, and when they show emotion, it’s often shallow. Since their calmness is staged, they can switch that mode off when they see that it no longer serves their purpose. Wild mood swings can help them win an argument. When they feel out-argued, that’s when they burst forth with a torrent of abuse – attacking you and using other forms of manipulation.
Typical responses from them: “Why are you getting so upset?” and “Look what you made me do!”

Lies repeatedly and unnecessarily; is a master of manipulation
They want to make themselves appear better, smarter and more skilled than they are. They lie about their job, their achievements and exploits. They make self-serving moral choices. They cheat whenever they can to achieve their goal. They do it everywhere – at work, at the self-checkout line and on their spouses.
Telltale responses from them: “When I climbed Mt. Everest…” and “This isn’t hurting anyone”

Doesn’t take responsibility; shows no remorse
They have a grandiose vision of themselves and deflect blame to others or the situation.  They will defend their false image to the end. They blame the victim for driving them into a rage. When they express regret, it’s often only because they’ve been caught. They will never concede that you’ve been right. They will attack your points by adding irrelevant details, taking your words out of context and/or trying to be superior rather than constructive.
Typical responses from them: “It’s not my fault” and “Why would I be sorry?”

Are superficially charming, glib; use people
Psychopaths try incredibly hard to make you like them, or they think that they’re just like you. Watch for a condescending tone and approach or a fake flash of a smile without sincerity. They feel the world is their oyster and want you to pick up the tab. They will want you to do the heavy lifting.
Typical responses from them: “Like you, I’m also an expert that that” and “So you will write the report”