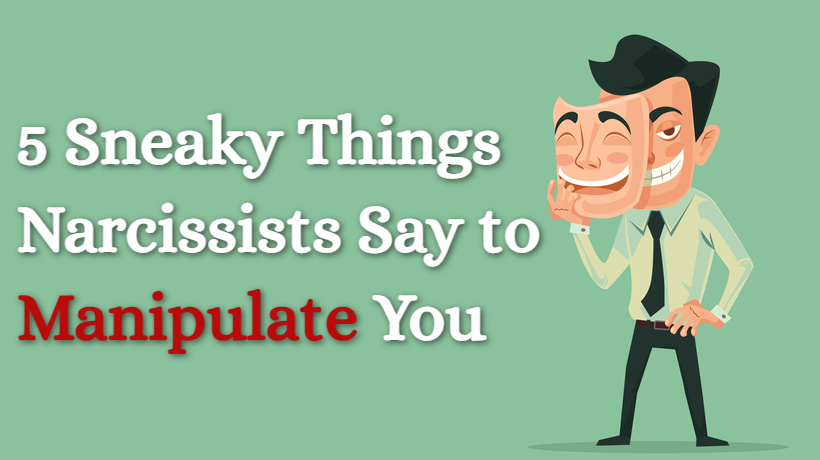 Narcissists are masters of language who use words to deceive, coerce, seduce, and mislead. They have no remorse, even though they may make it seem they are apologizing. This is born from a need to manipulate for control and they can be masterful at saying the right thing at the right time to confuse and belittle others.

The mind games narcissists’ play can be very damaging to those on the receiving end. Those who fall prey to their methods feel devalued. Their victims may feel anxiety, depression, and other psychological effects. Here are some important signs regarding the language used by narcissists. This helps you recognize what they are doing so you can form a shield against their attacks.

1.What they say: Often with a friendly smile on their face, they will say things like “You’re a very sensitive thing aren’t you?” or “No, you misunderstood what I was saying.”

What it means: These statements are usually a stream of small, almost insignificant comments that form the foundation of a narcissist’s verbal abuse. Starting early on in a working relationship, they use this method to begin to exert control over their victims.

How to handle: Notice it and be on guard. Don’t take these statements personally.

What it means: In this way, narcissists can constantly dismiss insults or criticisms by claiming that they didn’t really mean them. They know what they are doing and make their excuses to cover up their malicious intent. Their intention is to go on the offensive to maneuver themselves into a dominant position.

How to handle: See through these attempts as a way to confuse you as a victim, with an intention to make you unsure as to whether or not you should be offended. This is simply a power play by the narcissist so he or she can say whatever they like.

3. What they say: “How did you manage to get out of that tight spot?” Then later on: “This is just like you – to hide behind excuses.”

What it means: A narcissist has an uncanny ability to tease a person’s insecurities out of them and to identify all of the things that the other person considers as flaws. They also have a brilliant memory for such things and almost perfect timing when it comes to using them against their victims.

How to handle: To you, it may feel like their blunt questioning is like a way to build and strengthen the bond in your relationship that has been built to this point, but for the narcissist, it is a way to build up their stores of ammunition for use at a later date. Watch out! For when the time comes, they will launch an offensive, using the information you handed over in trust to reopen old wounds. The narcissist thrives on the power they hold over you and are not afraid to use it in any situation where they feel it would advance their cause.

What this means: Narcissists are projecting the undesirable and malicious thoughts and actions they use onto someone else. These qualities aren’t things that they wish to see in themselves so they overcome this by shifting the problem to someone else. They accuse a victim of wrongdoing to manipulate them into believing they have done wrong, even when they haven’t.

How to handle: See these accusations as projections that mirror the narcissist’s own problems. Notice how they repeat this again and again, with such conviction that you end up thinking that you actually embody these traits or perpetrated some wrongdoing. Don’t fall for it!

5. What they say: “You must remember when you took the credit for our work.” / “Thanks for your contribution to the report.” (When he is fully aware that he did the report himself.)

What this means: The more a narcissist can confuse their victims, the easier it becomes to make them bend to their will. This campaign of trickery and deceit is to slowly persuade their victims that they are losing their minds. This method permits the narcissist to write his or her own script and know that it will be accepted as truth.

How to handle: Watch out for constant questioning of your memory and their insistence that events were different to what is being recalled. They may be withholding information or manipulating the truth to make you feel ever more dependent on them.

While narcissists use words, they also often employ a silent approach, which can be very powerful. During a confrontation, they might choose to glare, frown, shake their head, or turn away. They might alter the volume of their voice louder or quieter to get their message across. They can use more than words to push their agenda.