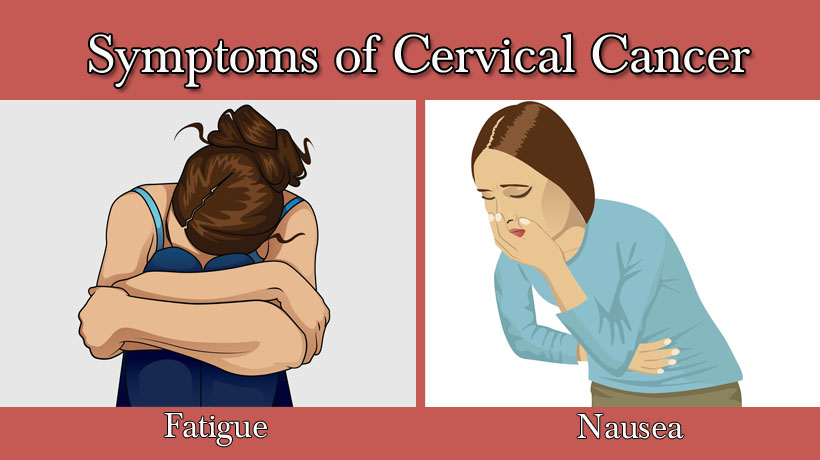 Cervical cancer is a type of cancer that occurs in the cells of the cervix, according to Mayo Clinic. Numerous strains of human papillomavirus (HPV), a sexually transmitted infection, is usually what causes most cervical cancer. When exposed to HPV, some women can have the virus live for years, causing some cells on the cervix to mutate into cancer cells.

Abnormal vaginal bleeding
One of the most common symptoms of cervical cancer is abnormal bleeding from the vagina, according to Regency Medical Centre. Bleeding between periods, after sex or after menopause can be a sign to check out with the doctor. This symptom usually is an advanced symptom of cervical cancer, it means that the tumor has affected nearby tissue around the cervix.

Vaginal discharge
If one has cervical cancer, the discharge could smell, turn pink or brown and bloody, and can have chunks of tissue, says the Regency Medical Centre. The discharge would be secreted fluid from the tumors and masses.

Increased fatigue
According to Regency Medical Centre, due to the augmented bleeding caused by the cancer, the number of red blood cells goes down. When the red blood cell count goes down there is an increase in fatigue because the body isn’t getting enough oxygen.

Nausea
Nausea can usually be caused by many different issues and cervical cancer may be one of them. According to Regency Medical Centre, as the cervical cancer develops the cervix expands which leads to pressure in the abdominal cavity. This hampers the digestive process, which makes you vomit.

Significant weight loss
Cervical cancer leads to a significant drop in weight due to the stomach not being able to hold down food, says Regency Medical Centre.  If there is a loss of 5 to 10% of body weight in a span of six months, you should speak with a doctor.

In order to find out whether you have cervical cancer, get tested regularly. Check with your oncologists and gynecologists because there may be potential of having cervical cancer.