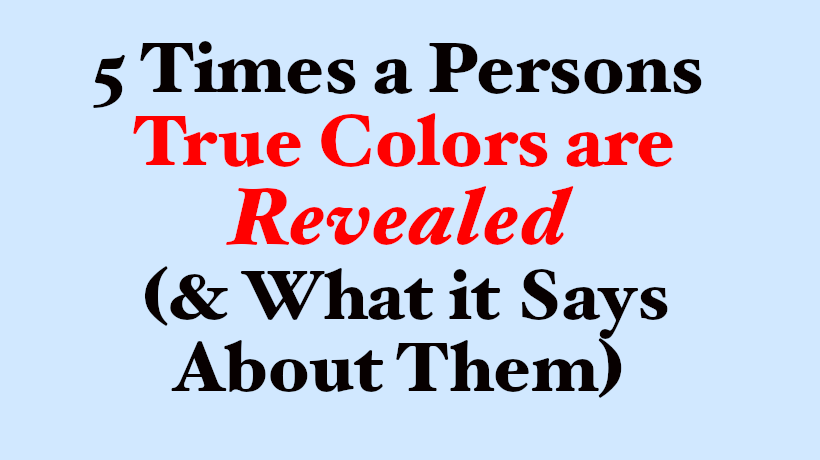 Some people walk through society with a mask and a set of rules as to how we are supposed to act. However, there are certain situations where someone shows their true colors. What does their reaction to a certain event mean? Read on to find out.

It becomes increasingly easier to show our true colors when we break up with someone or feel that we may lose them. While many are used to bottling up their emotions as a way to maintain the relationship’s honeymoon phase when the going gets tough many reveal their true emotions and personality. This often happens when people deal with dating a narcissist or when they cannot be themselves around their significant other. This is a sign that the relationship is built on a lie and something should be done.

Notice when someone talks to another person. Do they respond quickly right as the other person stops talking? Or do they take their time to think and then proceed to respond? If they respond quickly, this may mean that they are an extrovert, as extroverts tend to love to talk and say their thoughts and opinions out loud. If they think about their responses, this may mean that they are an introvert.

How they handle blame

How a person handles blame can really show you what their personality will be down the line. Do they place blame on others? Do they accept responsibility for their mistakes? Or do they blame themselves? Each response can reveal a person’s true colors. If they blame others constantly, this may mean that they have a personality disorder (like narcissism), as blaming others and sustaining one’s own status is a classic personality disorder trait.

If they accept responsibility for their actions and mistakes, this may mean that they are mature and are mentally and emotionally healthy.

If they blame themselves, this may stem from anxiety and past trauma (possibly abuse).

Allison Kelly Ph.D., C.Psych says, “Self-criticism likely originates from our early relationships with caregivers and peers. For example, children whose parents are more controlling and less affectionate grow up to be more self-critical adults.”

Everyone gossips now and again but if you hang around a person who gossips all the time, this may become a problem. Although Time magazine states that gossiping can calm people down, it is also known as a social skill. Mark Leary, Ph.D., says, “In light of that, they need to have as much information as possible about the people around them in order to know what various other people are like, who can and can’t be trusted, who breaks group rules, who is friends with who, what other people’s personalities and viewpoints are, and so on.” However, gossiping can tell you a lot about how a person reacts and even deals with another person.