5 Traits of People Who can be Untrustworthy 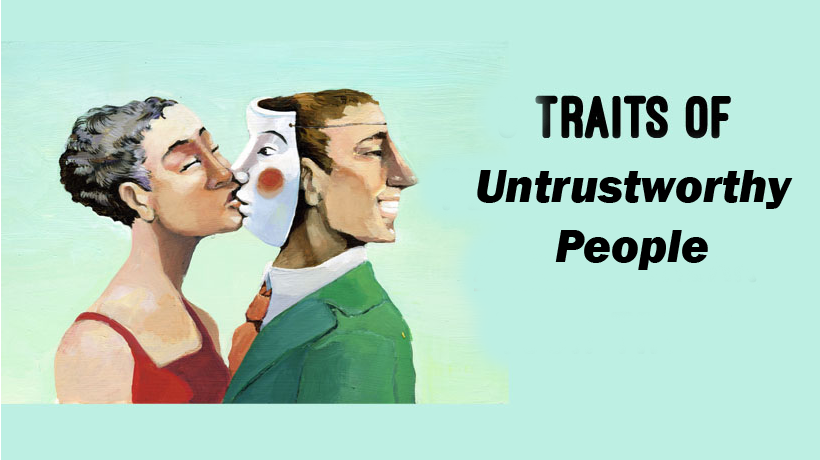 As an impactful speaker, Trent Shelton, once stated, “A relationship without trust is like a car without gas. You can stay in it as long as you want but it won’t go anywhere.” Trust is essential on the road to forming a lasting bond. As much as you give, you should have just as much in what you get back. Beware of the following characteristics of those who will always prove their disloyalty.

Too charming
I get a sneaking suspicion when someone seems ‘too nice’ and usually, I’m right about them. There ends up being a fatal flaw in their character which throws everyone for a loop. Listen closely when a person is telling you everything you want to hear, and nothing substantially personal. In the end, their true colors will be exposed after they’ve won you over and you’re already knee-deep into the relationship.

Lacks empathy
A deceitful person who treats people the way they do cannot have a large amount of empathy. If they did, they wouldn’t consistently betray others without regard for their feelings. An empathetic person is able to put themselves in another’s shoes and try to understand how the other person may be feeling. They would think twice before backstabbing friends or being unfaithful to their partners.

Narcissistic tendencies
A narcissist believes that the world revolves around them, much like an untrustworthy person. Rather than admitting their wrongdoings, they try to excuse their behavior to make it seem like you’re the one who drove them to make the decisions they did. They will always break your trust because their ego will win every time, resolving nothing.

Confidentiality doesn’t exist
When this person is telling you things that others have told to them in secrecy, it’s more than likely they’ll do the same to you. Kind of like the saying goes: “Who gossips with you will gossip of you.” These types of people do not respect confidentiality or hold it to a sacred standard. They’re more motivated to win over the people they’re divulging these secrets to in efforts to convince them that they’re getting exclusively special treatment.

Flip-flopper
There’s indecisiveness and then there’s fickleness. When someone is indecisive, it’s usually about little things they’re torn between that are both favorable options. When someone is fickle, their decisions are extreme, making it unclear where their loyalty lies or whether they even believe in such a concept.

Disclaimer: Opinions expressed are sourced by articles as well as the views of the writer.