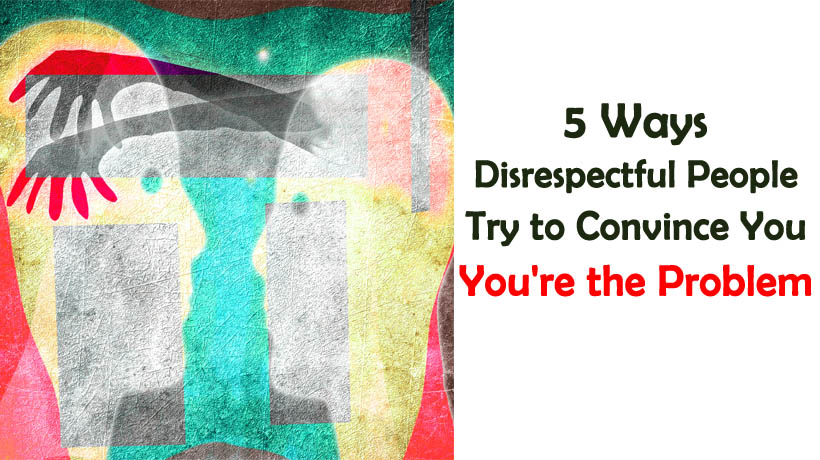 A bad interaction with someone may immediately cause you to think, ‘that person is disrespectful.’  What behaviors make you feel disrespected, even though that may not be their intent?

Attack
The idea behind this communication strategy is to put you down, so that the other person feels ‘one up.’  Attacking also serves to push you away so you won’t continue to engage with them about the relationship, because that makes them feel vulnerable.

Blame
The person blames you for initiating the interaction or for things you have done to them.  They might ‘play victim’ and accuse you of attacking them. This strategy ‘externalizes’ the blame. The person can focus their attention on thinking that you are wrong so they don’t have to look inside themselves to see their contribution to the interaction. Blaming others makes them feel they are right and strong.

Deflect
You might notice that the person tries to change the subject.  Or they try to debate or litigate the truthfulness of things you say. This is a strategy to divert your attention from their real feelings and the real challenge that exists in the relationship.

“All about me”
The person might suck up all the air talking about themselves and seem rude for not including you. They are caught up inside their own head and don’t read cues to make your interaction a ‘two-way street.’

“Crazy making”
Crazy making happens when the person says one thing and then says or does the opposite.  It feels to you as if they are ‘talking out of both sides of their mouth.’  Sometimes one ‘part of them’ is talking and can seem really sweet and nice, but ‘another part of them’ gets activated and is dismissive. Though you are aware that they are acting inconsistently and you can’t rely on them to ‘be normal,’ they may not be aware of themselves.

Here’s how you can respond in these situations:

First, recognize their approaches are ‘their stuff.’ These behaviors are about them, not about you.

Second, practice compassion by seeing these strategies for what they are. If a person is using one of these approaches, it’s because it’s the only way they learned to communicate.  People in their early life may either have been limited as teachers or that others treated them in a way where they needed to develop a wall to protect themselves from getting hurt.

Third, protect yourself by not internalizing their negative words and try to get the conversation back on a constructive track.  If you can’t, know they are revealing their limitations to you and end the conversation so you don’t waste any more time.