5 Ways to Handle a Boss Who's Rude to You 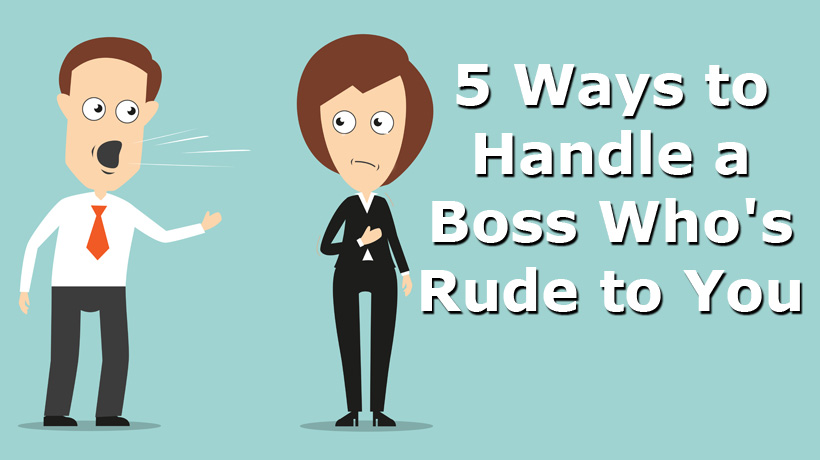 Disrespect and condescension are at the top of the list of attitudes that make a work environment feel hostile. It’s bad enough to feel like your colleagues don’t take you seriously, but that feeling can be amplified many times over when your superior is the one being rude.

According to one 2010 survey, 35 percent of the American workforce has been bullied and a whopping 72 percent of those bullies were the bosses of the bullied individuals.

How do you handle it when your boss openly acts like a jerk to you in the workplace? Here are five ways to move forward coolly and effectively.

Demonstrate Your Value
If your boss routinely berates you for being stupid, bad at your job or worthless to the company, prove them wrong.

Whoever hired you — perhaps that’s even the manager in question — obviously saw something in you at your interview. You’re in your position for a reason, and if you make it known that you’re not to be taken lightly, your boss may back off.

It seems counterintuitive to work your butt off for someone who doesn’t respect you, but if you let the insults roll off your back and keep working your hardest, he or she may eventually have to concede that you’re not lazy, you’re not an idiot and you are valuable to both the team and the company.

Call Out Rude Behavior
Being someone’s subordinate does not mean that you have to let yourself be bullied every day.

Don’t be afraid to address the situation directly. Whether that’s in a private conversation or at the moment of an inappropriate comment, make sure you’re prepared to be firm and level-headed. Many office bullies, including the ones who manage you, will back down after being called out.

Just be careful with a boss who’s quick to anger — they may not be receptive to pushback in front of their team.

Enlist Help
When you’ve done all you can on your own, don’t be afraid to go to HR or a higher-up manager to complain about your boss’s behavior.

If he or she is truly singling you out, chances are that your colleagues have taken notice too. They can be useful as backups in a situation that involves a third party.

Keep Your Temper
Whatever you do when the boss starts getting angry, remember to stay calm and keep your own emotions in check. By blowing up at your boss over a rude remark, all you do is fuel the fire.

If you react, your boss will know that he or she has struck a nerve, and can get a rise out of you. For some office bullies, that’s just the green light they need to keep trying to provoke you. Be the bigger person and return the insults with kindness.

Remember That It’s Not Your Problem: It’s Their Problem
The reasons for your boss’s bullying are more deeply seated than you know, and probably have nothing to do with you, the job, or your colleagues. It can be hard not to take what he or she says personally, but when it comes to the emotional issues of someone you don’t know beyond a surface level, there’s nothing you can do.

Ask yourself these questions:

If your boss isn’t intimately involved in your projects, or won’t have a direct impact on anything you choose to do in the future, thinking about these questions may make it easier to ignore the rude comments and insults.

Ultimately, you can only do so much in a bad working environment. It’s up to you to determine whether or not you can stick it out for the sake of the job. If you feel that you have to remove yourself from the situation for your own good, don’t hesitate to leave.