5 Ways To Inspire Confidence After A Setback 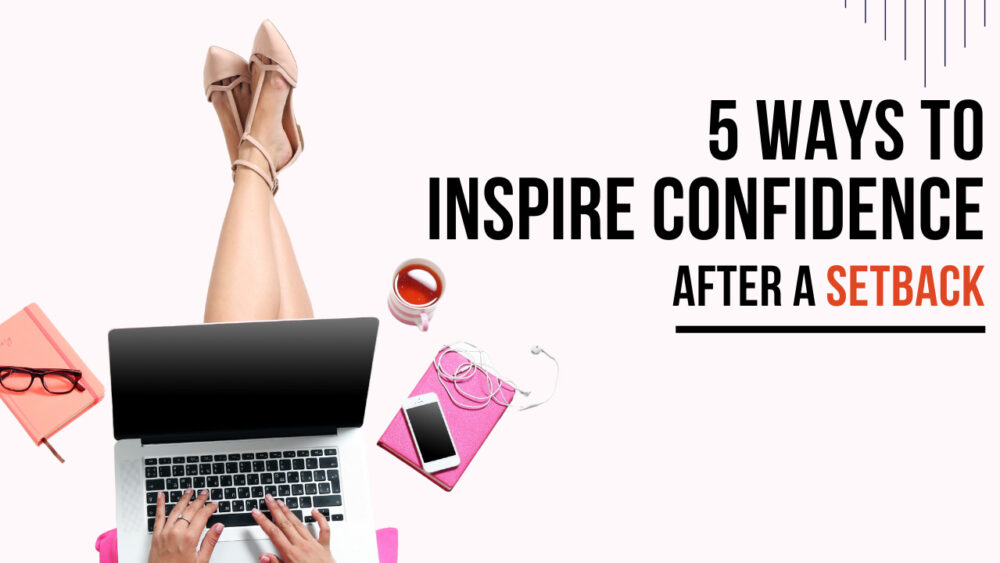 I have a client who worked hard to get her dream job. She networked, learned how to ace her interviews, and she turned down three opportunities that were great, but not great for her. She was patient, persistent and optimistic. She did in fact get her dream job and she was ecstatic. Six months into it she was receiving rave reviews from her boss and the team she led. And then she was called into her boss’ office and told she was being “let go.” She was devastated.

What do you do when a major setback comes your way? My client felt like lashing out. Her entire family had moved across the country when she accepted her new job. What were they going to do now? Here are five things my client did to get through her setback that will help you when you encounter your own challenge:

Expect setbacks to come your way
I believe in focusing on what you want, not on what you don’t want. At the same time, we would be naïve to think we can escape setbacks in life. People will break their promises, your job is never guaranteed, and the best of marriages can derail – understanding that these things happen doesn’t cause them to happen. Expect the best, but expect and prepare for setbacks as well. Remember, “To be forewarned is to be forearmed.”

Allow yourself to be human
I have a friend who is going through an incredibly hard time. I’m sure he knows it—he just won’t let anyone else know it. Whether you’re his friend or family member, he won’t acknowledge he’s been knocked down. Instead, he says “Everything will turn out just fine.” Here’s what I wish he was able to say: “Everything will be okay, but right now it’s feels unbearable.” That’s not complaining, it’s being human.

Accept your emotions
Setbacks are emotional and there’s no shame in whatever you’re feeling. If you’re afraid, angry, or feeling like nothing is going to get better, accept what you’re feeling. It doesn’t mean you want to stay there—it means you’re giving yourself permission to be human. Repressing or denying your emotions won’t eliminate them—it will keep them alive.

Give yourself time
If you have a major disappointment, give yourself time to process it. Take the time you need to take care of yourself instead of demanding that you bounce back in a day or a week. Doing the latter gives you the message that you’re not important enough to give yourself the time to regain your footing. Saying, “I’m going to be patient with myself, take care of myself and honor my needs” will actually speed up the process of rebounding.

Stay close to your friends
Sometimes when we get knocked down we just want to be alone. That’s healthy—if it’s not our main coping strategy. In life, we need air, food, and water for our physical needs. But we also have emotional and psychological needs we can only get from people who care about us. Take time alone for yourself as needed; just don’t isolate yourself from the important people in your life. Whether that friend is your life partner or colleague at work, stay close and let them help you recover from your setback. You’d be there for them—let them be there for you.