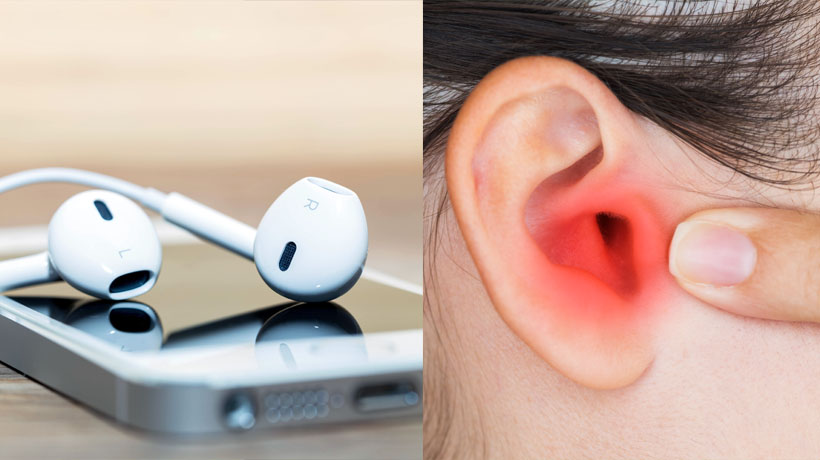 Headphones and earbuds are all over the place—but that doesn’t mean they’re always safe to use. Using earbuds and headphones can cause serious damage if you aren’t careful about your listening habits. To learn more about what your headphones might be doing to your body, check out the list below.

It can cause hearing loss
The biggest problem with headphones is volume—very loud levels of sound, very close to your ear. This is dangerous because loud noises, in general, are damaging to your ears. But on top of that, decibels increase with proximity—so the closer you are to the source of a sound, the louder it is. With earbuds, the source is directly in your ear!

A little bit of science: When sound waves enter our ears, they vibrate the eardrum. This is transmitted to the inner ear through several small bones, where it approaches the cochlea. The cochlea is filled with fluids and contains thousands of small “hairs.” When sound vibrations enter the cochlea, the fluid inside vibrates and causes the hairs to move. Louder sounds cause stronger vibrations, which means the hairs will move more drastically.

When you listen to music too loud for too long, the hair cells lose their sensitivity to vibration. This causes the sensation of “temporary hearing loss” after the exposure to loud noises: The hair cells take some time to recover from extreme vibrations. However, it’s possible that the cells will never recover. When the ears are too damaged to function normally anymore, headphones can lead to permanent hearing loss. It’s important to note that noise-induced hearing damage is almost impossible to recover from.

It can cause tinnitus
Tinnitus is the medical term for a perception of sound that has no external source. Many people who suffer from tinnitus describe it as a ringing in the ears, others as “whistling,” “buzzing,” “chirping” or “hissing.” Like hearing loss, tinnitus is caused by temporary or permanent damage to cochlear hair cells.

“This level of prevalence is alarming,” said Tanit Ganz Sanchez, principal investigator for a 2016 study on teenagers and tinnitus. “There was a notion that tinnitus was a problem of older people, but we’re seeing it becoming more prevalent in younger groups, including children and teenagers, because of their increasing exposure to high levels of noise, among other factors.”

It can cause vertigo
Vertigo is a condition that can be described as a sense of “the spins.” A person with vertigo will feel that their head or environment is revolving. Peripheral vertigo, the most common form, usually occurs when there is a disturbance in the organs of the inner ear used to maintain balance. When in good health, the structures function to orient us in space. This process of sound waves struggling to enter the brain is the same that occurs with hearing loss and tinnitus, but in this scenario, it can also prohibit the body from getting the instantaneous feedback that stabilizes us, causing dizziness or vertigo.

It can damage your brain
Interested in studying hearing, a research team from Ohio State came across a surprising discovery by a complete accident. Before the planned fMRI, the researchers tested participants’ hearing to make sure there wouldn’t be interference with the study. Some young people had subtle hearing problems, but nothing too serious. When they concluded the study, those with minor hearing deficits had fMRI results that were unexpected. Researchers expected brain activity in the left hemisphere of the brain; however, in the subjects with subtle hearing issues, the fMRI was showing activity in the right hemisphere as well.

As we age, human beings use more of their right frontal brain to process language. But in healthy young people, the left side is expected to be entirely responsible for language and comprehension. And yet, in the study, young people with mild hearing decline were already experiencing this occurrence.

It can cause ear infections
It’s best to not share your headphones with anyone else, and we don’t just recommend that to keep you from losing your only pair. In fact, sharing earphones may cause unwanted ear infections through the transmission of foreign bacteria from the inside of one’s ears to those of another. To keep your ears clean, keep your buds to yourself!