6 Signs You’re Dealing with a Narcissist (Watch Out) 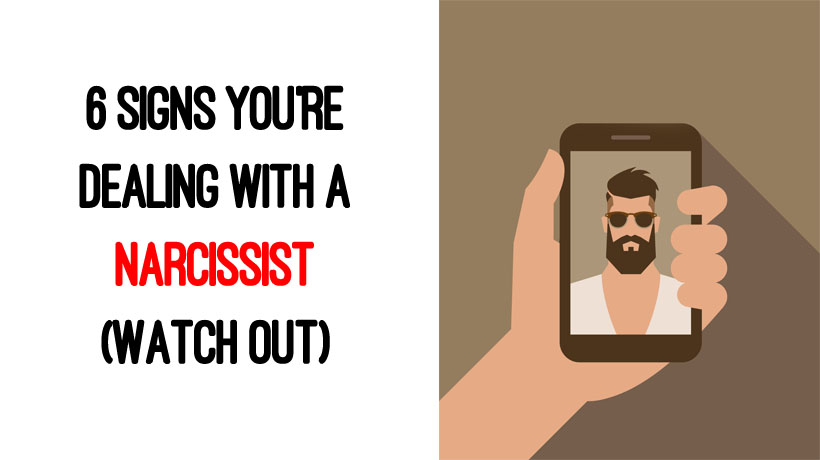 We usually think of narcissists as those who are a bit more than vain. But narcissism is far more complicated than that. There are many shades along a continuum from having an extra-healthy ego to a pathological one.  Research has clarified this definition as people who are in love with an idealized self-image, which they project to avoid feeling (and being seen as) their real wounded self. Deep down, most narcissists feel like they aren’t good enough even if they don’t want to admit it.

Here are six signs you’re dealing with one:

Acts with exaggerated self-importance
Narcissists think of themselves as one-of-a-kind persons such as heroes or princes/princesses believing that others can’t do without their contributions. Don’t try to set them straight or talk them off their pedestal, since they may become defensive, hostile and nasty.

Charismatic and persuasive
They can be very charming when they’re interested in you for their gratification. They usually make you feel very special and wanted. Be aware that after narcissists have gotten what they want, or if you stop fulfilling what they want, they may lose interest and drop you quite suddenly.

Hoards the airtime
These people love to talk about themselves without allowing you to have much, if any, airtime. You may struggle to have your views and feelings heard. If you’re not in agreement with the narcissist, they will likely correct, dismiss or ignore what you say. Be prepared for a one-sided conversation where they may interrupt and switch the focus back on themselves.

Breaks rules and violates boundaries
Narcissists enjoy getting away with violating rules and social norms, such as cutting in line and breaking multiple appointments. They don’t care much about others’ points of view, feelings, possessions or physical space. They lack sensitivity and will borrow things without returning, break promises and obligations and show little remorse.  Be prepared for them to blame you and victimize themselves.

Entitlement
In the mindset of a narcissist, the world revolves around them. Narcissists often assume they should get preferential treatment as a “special person,” and expect others to instantly cater to their needs without behaving considerately in return.

Manipulative
Narcissists have to be in control and tell others what to do. They try to use others as an extension of themselves, making decisions that suit their own needs. These requests or demands are often unreasonable. Narcissists do this to cover up their self-perceived inadequacies and flaws. They manipulate through projecting guilt onto others, such as saying, “I’ve given you so much, and you’re so ungrateful,” or, “you have to help me,” or “you’re not a good person.” Be protective of your emotions because they excel in triggering you to feel guilty, wrong or inconsiderate while under their influence.