6 Twisted Things Manipulators Try to Do to Take Control 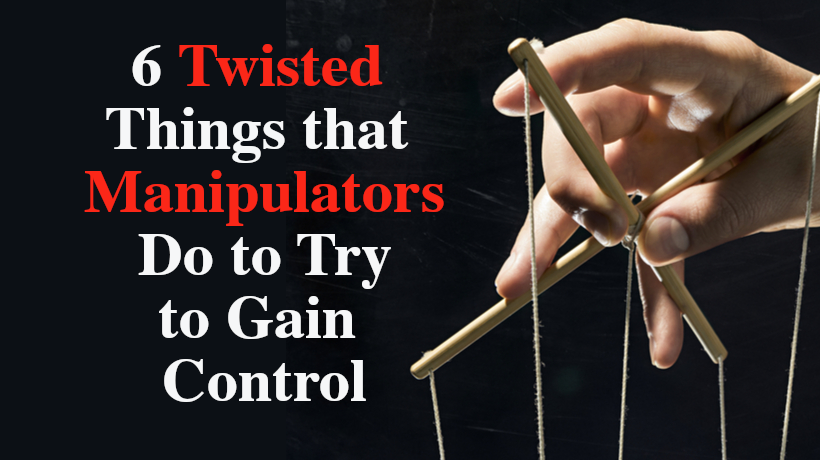 Emotions can be a powerful thing. They are the backbone of some people’s day-to-day existence. When manipulative people get ahold of someone’s emotions and realize that they can control them, they do everything in their power to keep that control. Notice a person in your life doing these 6 things? They might be trying to grasp onto whatever control they feel they have in your life.

According to Dr. Loren Soeiro, Ph.D., manipulative people turn everything into a “moral judgment”. They do or say anything to make you feel inferior to them. If you make a mistake, they don’t let it go unnoticed and make sure that you feel bad about making it. It can often make you want to be better just for them, which gives them power over your mental mindset.

In an argument, they might mention things that are important to you to draw you away from the initial conversation or say things that don’t really have any correlation to throw you off. Vocabulary also becomes exaggerated in the hopes that you may not understand. “Emotional manipulators are masters at altering reality with lies, fibs, or misstatements in order to confuse you,” says health and lifestyle writer Kimberly Holland.

3.  Use Your Feelings & Insecurities Against You

Using your feelings and emotions is a way to make sure that you’re in a difficult spot. Often times, manipulators will belittle you. They know your weak spots, so they use them to wound you. Holland says that they might make you feel guilty for feeling a certain way and take actions against you to make you feel vulnerable.

4. Blame You For Their Problems

When you take a step back, it always seems as if manipulators find a way to blame you for the hardships in their life. They have a way of invalidating your problems and bulking up their own, making you feel responsible for them and their day-to-day issues. Dr. Soeiro says manipulative people project their own concerns onto the world and interpret them through their own lens of unhappiness.

5. Make You Question Yourself

Sometimes, manipulators can make you wonder if you’re “good enough” for them. They leave you questioning your own instincts and principles if they don’t line up with the things they’ve been telling you.  “Manipulative people can play the victim, making you seem to be the one who caused a problem which they began but won’t take responsibility for,” says Dr. Abigail Brenner, M.D.

When it comes to the word boundaries, they don’t know the definition. Manipulators only focus on what they want and do anything to get it. According to Dr. Brenner, they don’t care about entering your physical emotional, or mental space. They don’t mind using you as a stepping stone to get where they want to be and have no regard for how you feel about it.